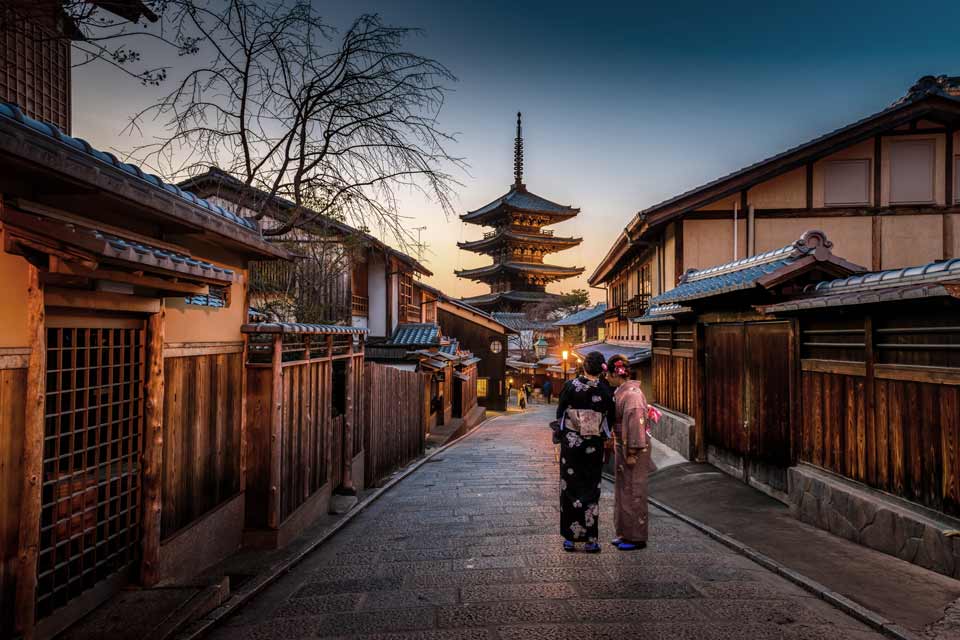 If there was ever a land that embraces its seasons, it’s Japan. Speak of spring and you’re instantly transported to the candy floss canopies of the blossom festivals. Winter offers evocative views of snow-dusted pagodas and monkeys in hot springs with icicle-crusted fur. In autumn, the brilliant red and orange hues of elegant Japanese gardens come alive, and Japan’s summers are filled with lush, emerald countryside.

Month by month there is an abundance of natural beauty and a sense of harmony with the people living alongside it. October and November are some of the best months to visit Japan, with the weather being relatively dry and mild and the autumnal colours providing a stunning display. See below for a month by month guide for the best time to visit Japan.

The majority of Japan is covered in a thick blanket of snow at the beginning of the year making it a beautiful time to visit. Aside from the snow, the weather is predominantly sunny and dry. It makes for a particularly magical experience when the castles and pagodas are covered in an elegant dusting of snowflakes.

There is an increase of Japanese travellers over the New Year, so advance planning is essential over these dates. However, it is relatively quiet for tourists. This is also the perfect time to find the snow monkeys warming up in the hot springs in Nagano, and the ideal time for hitting the onsen yourself! After, enjoy a steaming bowl of delicious Ramen.

Tip: Many shops and businesses are closed during the first week for Shogatsu so transport can be very busy at this time.

February is the coldest month in the year and the peak season for skiing in Japan’s Alps. Aside from snowsports, the weather is relatively decent with dry, sunny conditions. If you don’t mind wrapping up warm, this could be the best time of year to visit Japan. Spend your days soaking in an onsen or drinking sake in an izakaya.

February also marks the beginning of the diving season in Japan. Swim with sea turtles, seahorses, manatees, hammerhead sharks, reef sharks, white-tipped sharks and manta rays. February is also the only time you have a chance of seeing humpback whales in Japan.

Spring hits Japan in March with the iconic cherry blossom season, making March one of the most sought after times to book a holiday to Japan. The weather is a lovely balance and aside from the incredible display of cherry blossom, the scenery is absolutely stunning. Cherry blossom season brings with it all sorts of parties and celebrations which go well into the night.

If you’re not too interested in cherry blossom season, March – April is also the best time to visit Okinawa. You may not be interested in blossoms, but chances are, most other tourists, so you’ll have much of the place to yourself.

Tip: Cherry Blossom season is one of the busiest (and priciest!) times in Japan so make sure you book well in advance.

The weather begins to heat up in April and the cherry blossom season is in full swing, so naturally, this is one of the most popular times to visit Japan. There is very little more iconic than a cherry blossom blooming in front of a snow capped Mt Fuji. Locals even have blossom viewing parties!

April also marks the end of ski season, and where the slopes may not be that busy anymore, Kyoto can get very crowded.

Top tip: This is one of the busiest times of the year for tourism in Japan so expect the prices to be much higher than usual.

May brings with it ‘Golden Week’ – a week of national holidays. Travel can be especially difficult during this time as the majority of Japan are on holiday, which also means that lots of shops and businesses will be closed.

Aside from ‘Golden Week’, May is considered a fabulous time to visit Japan. The weather is much warmer and the countryside mountains are lush and full.

Top Tip: If you are planning on visiting some of the beautiful, paradise islands in Okinawa, be warned, May is the wettest month of the year!

June is a bit of a transition month for Japan. The weather at the beginning of the month is generally a continuation of May, so it is still pretty good. However towards the end of the month the rainy season begins so it can become very overcast – the month is aptly named ‘Typhoon June’.

June is also the beginning of hiking season in the Japan Alps.

The rainy season is in full swing by July so expect heavy, almost constant downpours. However, Mount Fuji is now officially open for climbing and late July to late August provide the best conditions to do it.

This is the perfect time to visit Hokkaido or the Alps to escape the intense heat of the cities.

Top tip: Late July – late August may mean the best weather conditions for climbing Mount Fuji, but there will be a lot of people traffic on the mountain trails during that time.

After the heavy downpour in June and July, Japan is slapped in the face with a scorching summer, August being the hottest month of the year. August is also one of the busiest months in terms of the festival calendar. Expect streets closed for parties, roads closed for parades and fireworks in almost every direction.

As August is during the summer holidays, you can expect the beaches and cooler mountain areas to be packed as people attempt to escape the humid August heat. This is also a brilliant time for climbing Mount Fuji.

Top tip: Japan is in full swing of their summer holidays and festivals by August which means hotels are usually fully booked. Make sure you book at least a few months in advance.

Depending on where abouts your going in Japan, September can be a good month to travel.

Okinawa has its high season at this time and southern Japan is still warm, however the cooler temperatures begin to creep in, in the north.

September is typhoon season, however a little wet weather is often followed by dry, sunny spirts. The days are still warm but much less humid.

Top tip: The hiking trails at Mount Fuji are closed from September.

October and November are generally considered to be one of the best times of year to visit Japan. Autumn is settling in, painting the trees in warming, rustic colours – making this a great time to see the sacred deer in Nara. The weather is mild – warm in the day and cool in the evening.

Japan receives much less tourism during October and due to it being the end of diving season in Okinawa, the beaches tend to be much less crowded but still warm enough for sunbathing.

December is another good time to visit Japan. The beginning of winter means the weather is still relatively agreeable being mostly sunny and dry. The ski season begins as the country gets submerged in snow. If you don’t mind a bit of cold, Japan is beautiful in December – especially in Hokkaido where it snows almost every day.

The Japanese calendar is very full between the end of December and the beginning of January as the country prepares for their extravagant New Year, so make sure you book hotels and activities well in advance.

This is the perfect time to find the snow monkeys warming up in the hot springs in Nagano!