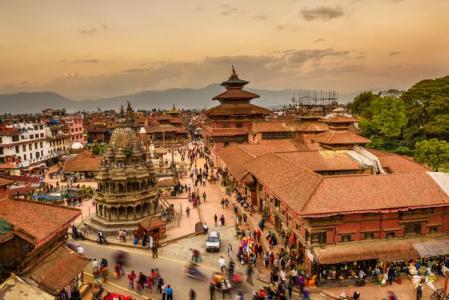 When choosing where to travel to on your next big trip, it is always important to research when the best time to travel is. If India and Nepal are on your radar for an upcoming tour, check out our recommendations below for the best time to venture to these two fascinating countries.

As the seventh largest country in the world, defining India’s weather is a tricky task. There are several climatic regions from the tropical climate of Kerala to the arid northwest of the Thar Desert. Neighbouring Nepal also has a mixture of climates; including alpine and subtropical.

The most influential weather pattern is the annual monsoon which affects both India and Nepal at different times. It sweeps up from the Indian Ocean, starting in the south in late- May along the Kerala coast. It travels across the continent in June and July finally reaching Nepal in July-September.

The period after the monsoon from October onwards is generally considered the best time to travel to both Nepal and India (with the exception of southern India which gets a second drenching during the retreating monsoon between October and December). The air has been cleared by the rains and the cool, dry weather is ideal for exploring the forts and colourful cities of Rajasthan, visiting the Taj Mahal and taking in Nepal.

Nepal can get chilly in January and February particularly in the higher regions and trekkers are advised to pack well and expect cooler climes. The plus side is the trails are quieter at this time of year. February to April is spring and the second ideal time to visit Nepal – it is very picturesque with the spring blossoming of wild rhododendrons.

In India, the ideal time to visit most of the country is between November and March. The sites of Delhi, the Taj Mahal, Varanasi, and the forts and colourful cities of Rajasthan as well as Goa and the south can be combined during these months.

Such colourful, vibrant cultures bring about an almost ceaseless calendar of celebrations throughout the year. Many festivals are local to an area, such as the Goa Carnival in March. The carnival is a lively combination of floats, processions, music and dancing. It was brought to the region by the Portuguese. The best time to travel to Pushkar is in time for the Pushkar Fair in Rajasthan, a 5-day camel fair in November and one of the largest of its kind.

The largest national festivals are Holi in March. Holi is a popular festival of colour. People throw coloured powder and water at each other. Diwali is another, occurring in October or November. It is the festival of light and the largest festival in India.

The people of Nepal are a combination of Hindu and Buddhist faith. Many of the celebrations in India are also found over the border, including Holi Festival and Diwali, called Tihar in Nepal. The largest and longest festival in Nepal is Dashain. This lasts 15 days and falls sometime between September and November.