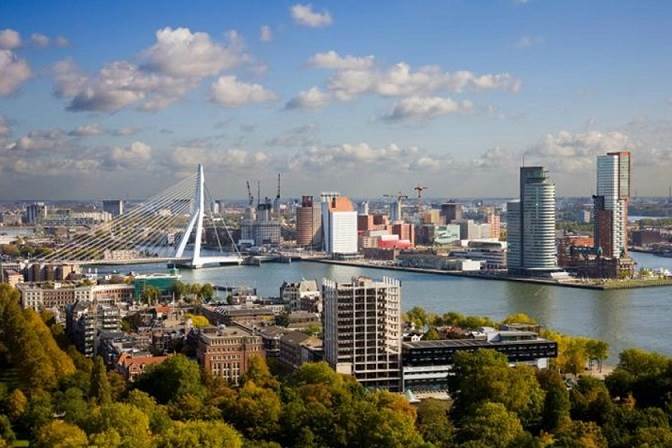 Love the idea of the Netherlands but really unsure about heading to the tourist heavy Amsterdam?

Having spoken to a Dutch couple on my recent travels, apparently Rotterdam is the next best thing and one of the up and coming cities in the country.

Filled with students and creatives, fewer tourists than the capital, it’s an excellent destination for a weekend away from the office.

But what are the best things to do in Rotterdam exactly? Read on and find out.

Located in the West of the country, Rotterdam is easily accessed by cruise, ferry or via international airport, with many direct flights in and out of the city from destinations all over Europe and the rest of the world.

As humans, we all need to eat. So why not head to the best places the city has to offer? Rotterdam is home to an eclectic mix of places to scoff and stuff your face.

With Michelin Starred FG Restaurant and FG Food Labs offering the finest , most experimental cuisines the city has to display, drop by for a mind bending eating experience.

What about food on the move? What’s better than market and street food at Fenix Food Factory or Markthal , the city’s most popular haunts for locally sourced, locally made produce?

For those looking for modern European dining with canalside vistas, look no further than Restaurant ‘t Ouwe Bruggetje. Enjoy a long meal set within a timber framed, traditional interior, and make sure you settle for a glass of wine or two, as the restaurants ensures you get the best by importing over one hundred barrels of the stuff every year.

Like any modern city worth its salt, Rotterdam has countless watering holes to wet your whistle after a long day of sight seeing and culture soaking.

For a quick, caffeine filled pick me up, head to Man Met Bril coffee roasters, where the smell of freshly roasted beans alone will give you a happy boost for a few hours

Or maybe you like a bit of nature with your coffee and cheesecake? Take a stroll in Het Park, one of the prettiest that Rotterdam has to offer, you will stumble across Parqiet , a quaint little cafe set within its leafy green splendor.

For something a little stronger than coffee, Rotterdam also has its fair share of gems. For beer, with more than a few to choose from you could end up spending your entire time hopping from one to another.

What comes after beer? Cocktails, of course.

And with a number of boundary defining cocktail bars, you’re truly spoilt for choice. If you like to feel like you’re being a bit naughty whilst you sip on a perfectly mixed cocktail head to Dr Rotterdam , a speakeasy styled bar with influences in the prohibition era.

You’ll be anxiously awaiting a knock on the door from the local police department any minute now. To give possibly the best cocktail bar in the whole of Holland a go, wander into Stirr , where cocktail drinking is an experience above all else.

Check out one of their events where you can learn about cocktail making and what spirits mix with what, straight from the experts.

City visits are incomplete without a visit to cultural events and centres which make them specifically unique, and once again Rotterdam has all of its visitors covered.

How about one of the finest museums in Europe for starters? It’s considered one of the best things to do in Rotterdam.

Enter Museum Boijmans van Beuningen , with masterpieces spanning the centuries and countries of Europe, from van Gogh to Rembrandt, set within a charming gallery space, you’ll be able to while away the hours no end.

If you’re looking for a city break between 1st and 3rd September 2017, Rotterdam has you covered with an absolute treat.

I’m talking about Wereldhavendagen, meaning World Port Days, offers up the opportunity to explore all things naval, with tours of docks and industrial quarters usually unreachable to the public, fancy dressed and a sing-along to old sea shanties. It’s an experience like no other.

The North Sea Jazz Festival will take the fancy of the bop lovers out there. Each year in July jazz musicians play at Rotterdam port, with fun times and groovy tunes in a vibrant and eclectic city, does a city break get much better than that?

Another excellent way to spend a few hours in a city like Rotterdam is to go watch Feyenoord, the local football (soccer) team play at the De Kuip Stadium, or Stadion Feijenoord.

The team were recently crowned champions of the Eredivisie, the country’s premier league, meaning expectations and spirits should be high going into the next season.

Those who like to see what’s out there now as well as what the future holds should check out Toko51/Cretopia Rotterdam. It’s an arts and cultural venue for the city and beyond’s contemporary producers, artists and performers, showcasing the best in current and future creative platforms.

There’s nothing like wandering around a new city, getting a taste for the new sights, sounds and smells that makes one completely different from another.

Rotterdam has its sights to see just like all great municipalities.

For the great outdoors, wander to Kralingse Bos and Plas just outside the centre, where you’ll be greeted by huge lakes, perfectly manicured gardens and forestry for a few hours of roaming.

Although the building is not strictly open to the public as it is now very much a contemporary office and design space, there are tours for around $20 in which you get to wander this fantastic building.

Van Nelle Fabriek is a marvel of 20th century architectural prowess. It’s also a spectacular sight merely to stare at from different angles from the outside.

How about a spot of history next? Pretty important history too, as to visit Oude Kerk, built in 1417, is to visit the church where The Pilgrims prayed for the last time before heading off on their hunt for America from the Netherlands back in July 1620. Soon thereafter they boarded the Speedwell, before changing to the Mayflower in England due to the former ship’s unseaworthiness.

A perfectly rounded city with all the foundations to be a truly great destination to visit for a weekend of exploring and relaxing. What’s more it’s placed in a European country famed for its friendliness and hospitality towards all visitors.

So, tear yourself rapidly away from the crowds of loutish tourists of other major European cities and take a trip to the quaint and quiet, yet definitely buzzing, Rotterdam.

If you have visited Rotterdam or happen to live there and have suggestions of what else should make our list, why not let us know in the comments? Don’t be shy now, we won’t bite.