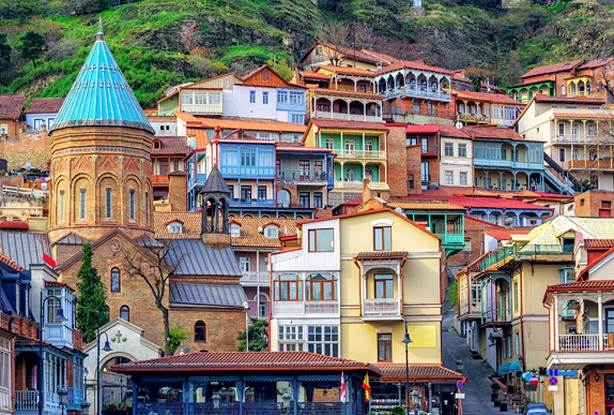 Are you looking for the best places to visit in June? Or are you here for some general travel inspiration? Head over to our Travel Calendar to find more destination!

Below you’ll find our best places to go in June.

Charming towns, incredible mountain views and rustic landscapes. Georgia is a destination that can be visited all year round unless you’re planning a trip solely to the Caucasus mountains as some areas are closed in winter. Due to the inevitable change in elevation throughout your trip to Georgia, it can be difficult to find a month that doesn’t require you to pack for two different seasons. In June in the capital Tbilisi, you can expect temperatures in the mid to high 20s degrees Celsius. While Kazbegi in the mountain region is usually a pleasant 5-10 degrees cooler, making Georgia one of the best places to travel in June.

Bordering Italy, Croatia and the Mediterranean sea, Slovenia is still a lesser travelled destination than its two neighbouring countries. The small country is known as one of the greenest countries in the world and with its breathtaking mountains, stunning views like Lake Bled and impressive architecture, it’s worthy of holding a spot on your travel list. June marks the beginning of summer in Slovenia with comfortable temperatures around 20 degrees Celsius which are perfect for exploring this charming country.

State of the art architecture and technology meets jungle – it’s probably the best way to describe Singapore. The country is located near the equator and therefore has stable temperatures around 30 degrees Celsius all year. While you’ll still have a great time in Singapore no matter when you visit, next to February and March, June usually records the least rain. So if you prefer exploring with as little rain as possible then Singapore is one of the best places to visit in June for you.

Rwanda is a gem for any adventure traveller with its deep jungles and bustling cities. June marks the end of the wet season in Rwanda, leaving the country with lush green landscapes. The weather conditions are comfortable with blue skies and temperatures in the early 20 degrees Celsius which are ideal for exploring this country.

St Petersburg is often referred to as “the Venice of the North” due to its location near the Gulf of Finland and the Neva River running through the city. In addition, the unique architecture and culture are making St Petersburg a captivating city break. June brings pleasant temperatures around 20 degrees Celsius to the city after the freezing cold winter months which is perfect for examining the magnificent architecture and wandering the streets of St Petersburg. Being located in the north, St Petersburg also sees nearly 24 hours of daylight this time of year, making it one of the best places to visit in June.

From the dry desert to the lush Amazon Jungle. From the mountain region with its own traditions and customs to the colonial beauty and culinary capital Lima. There is much you can experience and discover on a trip to Peru. Although June marks the beginning of winter in Peru and brings colder temperatures to the country, especially destinations at a higher altitude, it’s one of the most popular times to go. There is usually less rain during Peru’s winter. This makes Peru one of the best places to travel in June as the chances of catching a glimpse of iconic Machu Picchu behind a clear blue sky are the highest.

The Serengeti National Park hardly needs an introduction and is the reason why many travellers make their way to Tanzania in the first place.The Maasai people call the Serengeti National Park and its rich ecosystem of 30,000 km “endless plains”. June is the beginning of the dry season which means the vegetation is drier, making it harder for animals to hide and easier for travellers to spot exotic animals on safaris. Yet it’s the coldest month of the year and the plains are still fairly green making it a great time to go for anyone who wants to avoid the end of the season when temperatures soar and the plains are bone dry.

Rolling hills, medieval Transylvania and the culturally rich Maramures region, a trip to Romania will not disappoint. June is a great time to visit Europe, this also includes Romania. Similar to Slovenia, June brings pleasant temperatures in the early 20 degrees to the country. It’s also still considered the shoulder season. This makes Romania one of the best places to go in June with fewer crowds and comfortable weather for exploring cities and countryside alike.

Although June is officially the beginning of the wet season in Myanmar, just hear us out. Any adventure traveller who wants to explore the ancient temples, culture and history of Myanmar and isn’t after a beach holiday will want to reconsider the destination for their June holiday. Temperatures are in the high 20s degrees Celsius, which is lower than the majority of the dry season, and pleasant for exploring. The rain isn’t a continuous drizzle but rather tends to happen in strong downpours once or twice a day. In addition, flight prices are lower and places that are usually crowded are much quieter this time of year. This makes Myanmar one of the best places to visit in June.