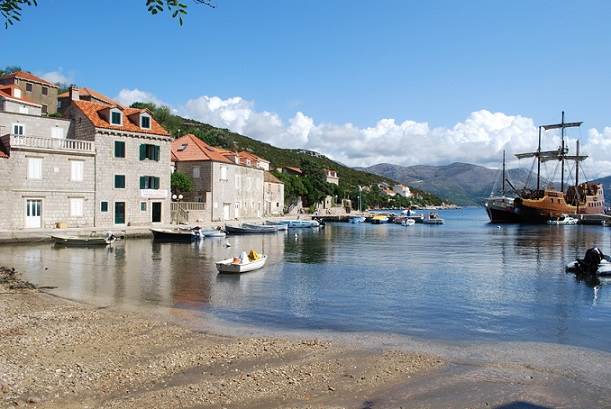 This hideaway island is the largest of the Elaphiti islands. Once a retreat for the aristocratic Croatians and now a popular place for a peaceful, relaxing Eastern European holiday. You can still visit ruins of some of the elite summer houses and renaissance castles. Stay in one of the two villages on the island, each on opposite sides, set around bays of crystal clear azure water. The white sand beaches are perfect for swimming, and snorkelling around the natural stone park provides a great photo opportunity. The island is famous for growing herbs, olive and fig trees, and producing quality Croatian wine. Dine alfresco to sample the islands local delicacies, while watching the sublime sunset fade behind local fishermen bringing in their catch of the day!

Plovdiv, the cultural capital of Eastern Europe is where ancient history meets modern city. One of the cities biggest draws is elevated atop one of the 7 hills around the city – the romantic Old Town. Walk the paved streets and enjoy the colourful, restored 19th century mansions-come-museums. Plovdiv has a turbulent history where clear influences from the Roman, Thracian, Slavs, Ottomans and Byzantines are seen in the mismash of architecture around this nostalgic city.

While the city is booming with creativity, especially in the hip district of Kapana, ancient ruins are still being unearthed. In 1972 and by complete accident, a natural landslide revealed remains of a roman amphitheatre. Now restored, it is once again used for hosting magical evenings of concerts and events. Visit the Tsar Simeon Gardens with a picnic of traditional Banitza and Lukanka and wander amongst the serene green spaces and fountains.

Lake Bled is one of Eastern Europe’s most popular holiday destinations. From honeymooners looking for a romantic spot with a perfect view, families needing some relaxing down time, or group adventure holidays trekking around the perimeter of the lake. The lake is flanked by the Julian Alps, cascading into the dazzling azure blue water. Lake Bled is dotted with thermal springs, ideal for swimming throughout most of the year.

The centre of the lake holds something special. A beautiful, tiny droplet of an island that can only be accessed by rowing there yourself or taking a traditional wooden gondola ride. Visit the island’s museum and ring the famous wishing bell at the church.

A place of mystery, intrigue, magic and horror. The (apparent) home of Count Dracula, Bran Castle is almost hidden from view, nestled in a dense, dark wood which only adds to the mystic ambiance. Climb the creaky stairs to the conical tower and admire views of the wooded mountain pass from Transylvania.

Tours around Bran Castle are shrouded in horror stories, however true they are! Visitors will hear a lot about Transylvanian folklore – which the Bulgarians are fiercely proud of. Rooms are filled with bearskin rugs, open fire places, and 19th century antiques. Each turn will take you further back into the mystic history of this gothic fairy-tale castle.

Named the ‘king of the European Rivers’ the Danube Delta is one of Romania’s most popular attractions. The river snakes through several countries, absorbing a myriad network of waterways leading to Europe’s largest wetlands. Home to 300 species of birds including Pelicans, Cormorants, wild swans and giant dragonflies, this is a wildlife lovers paradise.

Drift along the sleepy river, passing through blankets of lily pads, reed islets and marshlands to the sweet sound of croaking frogs. Staying on the Danube Delta is one of the most unusual holiday destinations in Eastern Europe. River taxis are required to get anywhere, including to your hotel and due to your surroundings, you will dine on some of the finest seafood in Romania.

Surrounded by mountainous landscapes rivalling Switzerland, is set ‘the Jerusalem of Europe’ – Sarajevo. With an incredible history and diverse heritage it has become one of Eastern Europe’s most intriguing cities. A violent history including an almost 4 year siege has left the city peppered with remnants from its past, proudly wearing its heart on its sleeve. Sarajevo was one of the lesser known holiday destinations of Eastern Europe but is quickly becoming a new hot spot – and you can see why. It’s simply beautiful!

The city is ringed with verdant, forested mountains providing incredible views from almost every angle. The best way to see this beautiful landscape is by hopping on the cable cart which connects the Old Town with the Mount Trebevic.

Macedonia is a fascinating and beautiful holiday destination, with a great mix of city sights and nature. The capital of Skopje is shrouded in history, with a strong influence from the Ottoman Empire – it even has the largest European bazaar outside of Turkey. The city is home to many museums where you can learn about the struggles Macedonia has faced, as well as important sights such as the Mother Teresa Memorial Room and the Kale Fortress.

Outside of Skopje, be sure to visit Matka Canyon which is only around 30 minutes from the city. Here you can cruise down the river taking in the magnificent soaring cliffs around you before exploring the cave at the end of the journey.

The former Russian capital, St Petersburg has a short but incredibly intense history. Built on a marshland only 350 years ago, this is still a relatively new city compared to the rest of Eastern Europe. Since then, the city has been the subject of the Bolshevik Revolution which began with the Aurora warship, docked in the city’s bay. St Petersburg also fell victim to the nazi siege which lasted 900 days and left 2 million citizens dead.

With the picturesque canal systems and the magical ‘White Nights’, St Petersburg can be a very romantic setting. White Nights appear in June – July when the sun doesn’t fall low enough for the sky to go dark and the city is in constant celebration with street parties, festivals and concerts.

The oldest of Croatia’s 8 national parks and a UNESCO world heritage site, the Plitvice Lakes is a natural beauty that is practically otherworldly. 16 lakes, tumble down to form crystalline pools, surrounded by a carpets of deep green. The Plitvice lakes are a little slice of Eden and hard to believe it’s in Eastern Europe!

The colours of the national park are what makes it so special – a million shades of bright greens and blues with the occasional vibrant orchid peeping through. Swimming is not allowed, which helps keep the water so clear. Aside from the beautiful water, one of the main draws of the national park is the rich flora and fauna. Brown bears, deer, lynx, otters and a variety of marine life are easily spotted wandering around.

Tallinn is famous for its colourful, historic centre, enchanting tourists to wander the cobbled streets and ancient ruins. Climb the hill of Toompea to be met by a sea of red bricked rooftops – an iconic image of Tallinn. Being one of the best preserved towns in Eastern Europe, medieval churches, turrets and spires can be seen on every corner inside the ancient city walls.

However, Tallinn isn’t just beautiful old buildings. It also has a thriving creative scene, famous for glassblowing, weaving and pottery. Alluring streets are lined with fashionable boutiques, trendy sushi bars, artisan bakeries and vibrant cafes. The city also has a great, local nightlife with lots of traditional pubs and bars to waste away the evening. Float down the dreamy Danube, watching out for the 300 species of birds and wildlife.

A majestic mountainous backdrop cascading into a bay of beautiful clear blue water. Kotor Bay is a hidden gem in Eastern Europe but quickly becoming a popular holiday destination. The bay is lined with medieval towns connected with scenic roads and pretty paved streets. Walk amongst the maze of museums, citadels, Venetian palaces and charming squares. In the evening the bay comes alive. Fortress walls glow, cafes turn into bars, streets are filled with a lively buzz and the castle clubs are renowned for always putting on a good night!

Row over to the artificial island of ‘Our Lady of the Rocks’. According to legend, this island was created by a fisherman who had been shipwrecked. Supposedly, he saw an icon of the Virgin Mary with Christ on the sea cliff and vowed to build a church in her honour on that exact spot. The island is incredibly beautiful, the boat ride even more so.

Krakow is a medieval town of myths and folklore. The Wawel Dragon lived in a cave at the foot of Wawel Hill, gorging on sheep and local maidens, eventually slayed by a local cobbler. The dragon bones are still hung in the Wawel Cathedral and the caves – which are quite remarkable – are open to tourists.

Amongst the remnants of folklore and history, the town is bursting with lively backstreets and businesses bringing this town back into the 21st century. Restaurants, cafes and bars fill stylish, trendy squares. Krakow is fast becoming a fashion hub with fashion houses popping up all over town. The city is also home to the largest medieval market square in Eastern Europe.

Famous for the majestic Kremlin that dominates the city and the red square built up of imposing, stunning structures, Moscow is a city that never ceases to amaze. The main attraction, the Kremlin, houses within its high walls, a complex of five palaces, four cathedrals and numerous towers. The Red Square is vibrant and bustling at any time of the day and is often used for special events, rehearsals and town festivals.

Dress to the nines and spend an evening of opera inside the elegant Bolshoi Theatre. Visit the urban jungle of Gorky Park to stroll through the immaculately lawned gardens, hire a bicycle or even have a game of tennis. The Pushkin Museum of fine arts is also a must-see. It houses an enviable collection of Italian renaissance art, 17th century Dutch masterpieces and an extensive exhibit of ancient civilisation artefacts.

The architectural treasure trove of Budapest is centred around the magnificent Danube river, splitting the two halves of the city – Buda and Pest. Buda, the hilly half, offers incredible, panoramic views of the city and the gothic parliament building dominating the Danube River. Wander the Castle District, admiring the incredible architecture of Buda Castle and getting lost amidst the crooked streets.

Head over to the Pest side and take a dip in Budapest’s most famous attraction, the Szechenyi Thermal Baths. With the nickname the ‘City of Spas’, this is definitely one for the bucket list. Wander the bohemian Jewish quarter, browsing flea markets and drinking in the edgy ruin bars.

Being the setting for the Game of Thrones series, Dubrovnik is fast becoming a popular Eastern European holiday destination. Enter the famous castle through Pile Gate and walk the medieval city walls experiencing incredible views at every corner.

Take the cable car up to the top of Srdj Hill and watch the magical sunset over the Elafiti Islands. Walk the polished, limestone streets of Old Town whilst sampling Croatian ice cream. Appreciate the medieval architecture of the gothic-renaissance palace. Snorkel in the warm turquoise water of the Adriatic and relax on the beautiful stretch of coastline. Dubrovnik is also a car free city which just adds to the charming, laid back cafe culture vibe.