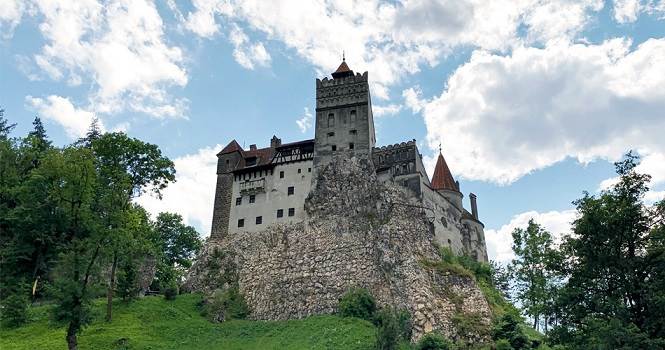 Hallowe’en and Día de Los Muertos, celebrated at the end of October and the beginning of November respectively, are when we celebrate everything that’s dark, dire and dead. This year, take some inspiration from some of the scariest and most mysterious destinations in the world, from Dracula’s Castle in the depths of the Romanian countryside, to the heart of the Namib Desert where charred trees have stood for over 1000 years in an otherworldly kaleidoscopic setting. Experience Halloween in any of these destinations around the world, and no creepy house of horror ride or zombie-themed bar crawl will ever compare.

‘Dracula’s Castle’ in Transylvania – Built on jagged rocks and surrounded by the misty Carpathian Mountains, the imposing fortress in Western Romania was home to the menacing Vlad the Impaler, who was the inspiration for the 1897 horror novel ‘Dracula’. Vlad was a menacing ruler, who was known to impale his enemies and conspirators, although whether he drank their blood was never known…

Charles Bridge in Prague – The bridge, which was the most important connection between Prague’s Castle and the city’s Old Town until 1841, is decorated with 30 imposing stone statues and statuaries, most of them baroque-style. The bridge tower, on the Old Town side of the bridge, is often considered to be one of the most astonishing gothic-style buildings in the world. If walking across the bridge alone on a misty morning doesn’t make the hairs on the back of your neck stand up, nothing will!

Lake Maracaibo in Venezuela – Unique atmospheric conditions mean that the night skies above the lake are usually lit up by hundreds of explosive streaks of lightening, with up to 25 streaks a minute. Surrounded by the remote landscape of one of the world’s oldest lakes, you’ll feel like you’re on the set of a horror film as the sky is lit up by the dramatic veins of electricity.

Deadvlei in the Namib Desert – This white clay pan, surrounded by some of the world’s tallest sand dunes, is dotted with dead trees that have been blackened by intense sunlight. The vivid colours of the dunes and the pan, together with the scorched tree skeletons, make for a truly surrealist backdrop that will make you feel like you’re on another planet.

The Recoleta Cemetery in Buenos Aires – This expansive cemetery in the heart of Buenos Aires is full of huge family mausoleums made of marble. They are built with glass windows, so as you walk down the narrow lanes between the tombs you can see the coffins in their resting place. What’s even more harrowing is that you can see staircases that lead to the basement of the tomb. Try not to linger too long or your thoughts will run wild!

Oaxaca in Mexico – Although Día de los Muertos is recognized all over Mexico, Oaxaca (pronounced wa-ha-ka), has become known for it’s ornate celebrations venerating the return of deceased loved ones on 1st and 2nd November. Surrounded by various tombs, ceremonial altars and decorated tunnels, pyramids and palaces, this is a fantastic setting in which to watch the ‘Comparsas’, which are theatrical performances that represent the return of the dead.