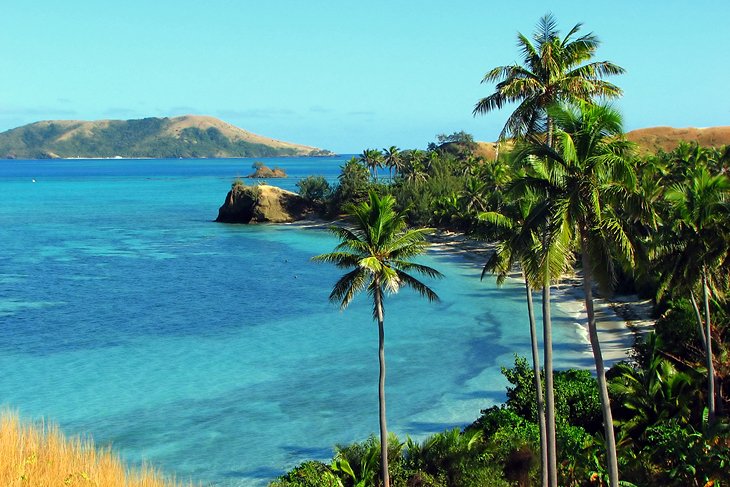 Fiji is an archipelago in the South Pacific, made up of 330 islands and over 500 islets, all of which are a virtual paradise. Okay, so this seems a little unfair, how can it be humanly possible to make such a super-human decision and choose one to be the best island in Fiji to visit?

Well, this is how it is. There has to be one that is somehow better, by some definition than the others, right? So, here’s the definition by which we’ll judge: the best island must offer at least similar to that of which all the other islands offer, would be the ideal island give you the best taste of Fiji for a first-time visit. Perhaps it presents the best base to give you the opportunity to explore the rest of the islands, as well as boasting its own unique features that none of the other islands or islets can compete with.

Without much further ado, a winner has to be declared, so here goes:

Viti Levu is the largest of all the islands in the Fijian archipelago, and by far the most densely populated with over 70% of the country’s inhabitants calling the island their home. The island boasts the capital city, Suva along with rainforests, peaks to hike, sand dunes, rivers and early settlements.

The island is the departure point and gateway to all other Fijian Islands, and offers an extensive sampling of everything that the country has to offer. From the people, their culture and food, to the country’s plentiful natural wonders.

Atop some of the impressive dunes you’ll be offered an unravelling view over Viti Levu’s luscious and heavily vegetated hills on one side, and vistas across the picture-book coastline on the other.

Rangers are available to offer information on walking tracks, archaeological locations or other site details, whilst the dunes are open for visitors, between 8am and 5pm daily. Fiji’s National Trust has now protected this site by giving it national park status, ensuring its natural beauty can be enjoyed for generations to come.

The Sigatoka River runs southwards from the centre of this otherworldly island until it reaches Viti Levu’s Coral Coast, doffing its cap to all forms of fauna and flora as it meanders along its intended journey through insanely fertile valleys.

Joining this tranquil river via Fiji’s multi-award winning boat safari will offer you the most authentic and engrossing way of enjoy the sights, sounds and smells that are on offer. Sugar plantations and vegetable fincas line the riverbank, giving you an insight into local Fijian sustenance and exportation practices.

Visit Suva, the capital of Fiji. With the friendliest of hosts, majestically broad avenues, British colonial architecture and Victorian-era parks and gardens, the city is a true metropolis, bustling and beating to its own drum

At night, the city transforms into a buzzing hub of good times, with the more popular bars and clubs stretching out along McArthur Street and Victoria Parade. What better time to sample the locals’ famed hospitality than over a drink or two and a dance off?

The municipal market, in which you can pick up the freshest and most colourful of fruit and vegetables, offers you a real taste of Fiji, with the opportunity to pick up a couple of souvenirs for your trip not to be missed.

As with any city worth its salt, Suva also hosts typically urban institutes and centres, with the Fiji Museum offering exhibitions relating to local culture, both contemporary and historical, and the TappooCity and MHCC malls offering the perfect outlets for you to unwind with a bit of retail therapy after a hard morning swim.

Colo-i-Suva Forest Park is quite frankly a paradise within paradise, a mix of tropical greenery and plant life and walking paths lead to all sorts of natural wonders. Exotic wildlife and foliage call this tantalisingly tropical rainforest their home, their sounds and smells leading you along your marked out journey towards a collection of natural pools and waterfalls, forged over millennia by the eroding waters that push through in their tranquillity.

The refreshingly chilly waters offer a chance to dip in and cool off from the trek through the humid rainforest, which seems as if to birth the slowly meandering streams and creeks.

There is more than enough opportunity to embrace your inner Mowgli, with tree trunk crossings and the chance for the more adventurous among us to navigate the rocks within and surrounding the mini cascades.

Okay, so not strictly part of Viti Levu, but forgive me, as the island was chosen for being the main thoroughfare for adventuring to and exploring other islands which surround it. And this particular location is merely four miles from the southern shore of the main island and is easily accessible by boat, so basically attached…

The stunning island of Beqa, and it’s accompanying lagoon shows off its towering and enticing peaks from across the water. This island is definitely one for those with an affliction for wishing to frighten themselves silly as Beqa lagoon is most known among scuba divers as spot for shark spotting. With more than eight separate species being recognised to call the surrounding waters their home, just don’t watch Jaws beforehand.

If you’re like me and like to leave scary animals to mind their own business, but don’t mind bothering other humans, you can wander Beqa’s rocky terrain to discover a handful of isolated villages, in which the also rather dangerous tradition of fire-walking is said to have originated.

Another island just off the north coast of Viti Levu is Nananu-i-Ra (I’m still not cheating, I swear).

Spectacular above ground, with glorious beaches and offshore gusts making it a perfect location for windsurfing, also has, hidden beneath the surface of its coast, a rather spectacular secret.

A soft coral reef along with an abundance of sea life is waiting to be discovered and explored either through scuba diving, or simply by snorkelling.

Garden of the Sleeping Giant

The name alone conjures up thoughts of some mythical and peaceful place where undiscovered and unrecorded wonders lie, just for your discovery.

The magical Garden of the Sleeping Giant lies at the entrance to the Nausori Highlands, miles from the next nearest settlement, its remoteness just breeds an air of tranquillity for a rare chance to just be at one with your surroundings.

With canopied pathways, botanical gardens and calming lily-ponds, these well-kept but naturally curated meadows are a must-see!

In the highlands of Viti Levu, nestles the quaint community of Navala. With over 200 thatched roof and bamboo walled buildings, it’s one of the few locations left in Fiji with fully traditional architecture still in tact.

With mountains and ridges either side for protection, and a river which floods often enough to cut off the village from outsiders, it’s well preserved and well defended.

The people here however are more than happy to accommodate those who wish to learn of the traditional ways of the Fijian people, and there are even Eco tours which help you understand how the people exist sustainably. welcomes visitors with open arms and wide smiles.

More natural wonders to feast your senses upon. The Namosi Highlands further expose Viti Levu, and in deed the whole of Fiji’s absolute depth of beauty, with towering peaks engrossed entirely by rainforest, this whole area is a natural, untamed but so perfectly accessible habitat for the childlike explorer in you.

You can hike around the area, but with endless sights to see in the hectares of valleys and cliffs, from yet more rivers and waterfalls to otherworldly canyons, your best bet is to take the guided tour in an off-road vehicle, or, with the Namosi Highlands tour .

The Navua is a 35 mile river stretching from its source atop Mount Gordon, all the way to the southern coast. It’s a fast flowing river, which has excavated the valleys leading through the heart of Viti Levu’s otherwise untamed landscape, creating a plethora of obstacles, from waterfalls to tight and twisting creeks, perfect for white water rafting if the intrepid adrenaline junkie in you takes over .

So The Best Island In Fiji To Visit Is…

Viti Levu, then, seems to be pretty much all things to all people.

Whether you’re just wanting to snorkel in the clearest waters possible, take a city break and soak in some culture and shopping in paradise, learn about other cultures and traditional survival practices or get your heart beating and your senses tingling with adventures and explorations, this island is always for you.