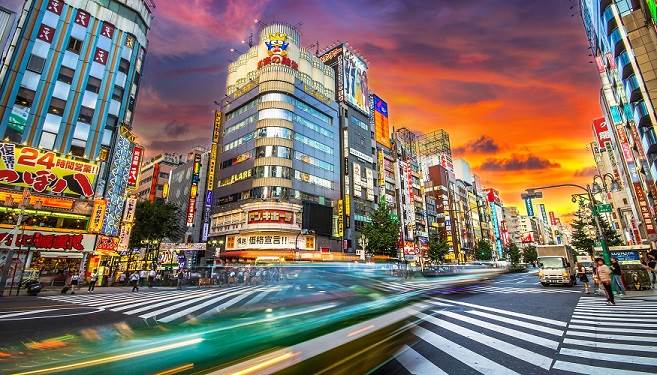 Tokyo is an enormous and exciting city with 13 million citizens and a further 420 million plus visitors to the thrilling metropolis each year, making it a hugely popular destination for residents and travellers alike. Whilst its size equates to more sights to see, food to eat and people to watch, it also creates the problem of where exactly is the best area to stay in Tokyo? Best Area to Stay in Tokyo for Tourists and First Time Visitors

This guide has been created in order to help you decide for yourself where you should stay on your trip to Japan’s capital. Due to its sprawling nature, the main considerations for areas are convenience first and how they link up with the rest of the city, then what each area brings to the table itself.

Shinjuku is one of the best areas to stay in Tokyo. Its close proximity to the Yamanote Line, which is the most central transport link in the whole of the city makes it a perfect location for seeing the rest of Tokyo. That, coupled with thousands of eateries cooking up dishes both local and international makes Shinjuku one of the most desirable areas for visitors to Tokyo.

Shinjuku is also nearby to some of the best sights to see in Tokyo, with Senso-Ji and Shinjuku Gyoen National Garden as two of the city’s most enticing attractions, alongside modern architectural wonders such as the Tokyo Metropolitan Government Building and the ever-luminous Kabukicho entertainment district

Senjo-ji is Tokyo’s oldest temple, it has a five-story pagoda called Goju-no-To, rebuilt in 1973 and modeled after a similar structure at Daigoji Temple in Kyoto.

It is also the must-stay area for any bookworms out there, with Tokyo’s best bookshop, Kinokuniya located here.

Stay at the Park Hyatt, Tokyo for five star luxury in the heart of Shinjuku.

The main transport hub for the city is Tokyo Station, with the surrounding area of Marunouchi. As well as being an incredibly convenient location for getting around the city and indeed visiting other cities – such as Kyoto via the Tokaido Shinkansen line – there are also some of the city’s top department stores like Nihombashi located in the vicinity for those that are in need of a little retail therapy or simply a browse on their trip.

Restaurants are ten to the dozen in Marunouchi, with T’s Tantan serving up delights in the form of Japanese dishes in vegan or vegetarian form. For the raw fish fanatics, there’s also the delectable Sushi Kanesaka amongst the countless options in the area.

Another draw to the area comes in the form of the Imperial Palace and its associated parks. The palace is the primary residence of the Emperor of Japan offering up stunning architecture with landscaped grounds that only the Japanese could curate.

On the west side of the Yamanote Line lies Shibuya. Another large transport and commercial hub, similar to Shinjuku, Shibuya also hosts eateries and attractions aplenty. The Meiji Shrine and Yoyogi Park offer visitors the chance to delve into the history of Japan, with the latter being part of the 1964 Tokyo Olympic Village.

It’s a little quieter than Shinjuku with more of a youthful scene associated with it, thanks to the trend-setting shopping streets in the area of Harajuku. The main thoroughfare is Takeshita Dori, from which many side streets with fashion brands, restaurants and cafes disperse.

Another local attraction is Yebisu Garden Place , an arcade with shops and a number of visitor centres such as the Yebisu Beer Museum and the Tokyo Metropolitan Museum of Photography.

An attraction within itself is the classy Roppongi neighbourhood. Although not located on the all-important Yamanote Line, the area’s own excellencies mean that you rarely need to stray too far to find a wealth of city sights or venues for foodies.

Considered one of the more cosmopolitan districts in Tokyo, Roppongi throws up fine dining and excellent options for nights out. For Teppanyaki, visit XEX, or for Kushiyaki head to Joumon Roppongi. Once dinner is over, make your way up to the 33rd floor of the Prince Park Tower Hotel to Sky Lounge Stellar Garden for cocktails with the most spectacular view over the whole of Tokyo. Or, retreat to code name MIXOLOGY for a truly scientific cocktail experience where cocktail making is an experimental procedure.

Another extremely convenient area of Tokyo to stay is Shinagawa. Although the area itself isn’t the most attractive for tourists, its ease for commuting to the rest of the city means it deserves a place on this list. Situated right on the Yamanote Line and the Tokaido Shinkansen line making it easy to get both around Tokyo or to other parts of the country. Ideal if you’re planning to stay a little longer than a few days.

Hotels are also excellent here, thanks to its location near such essential transport links. Making it a very good and amenable area, with options aplenty for comfortable sleeping.

The Prince Sakura Tower is an ultra luxe accommodation choice for those looking to travel in style.

Shiodome is a business district with sparkling, high-rise office blocks and hotels a little south of Tokyo Station. The nearest metro stop is Shimbashi and is on the Yamanote Line, keeping it super convenient to venture further out around Tokyo.

The area’s main attraction is the Hamarikyu Gardens, which are spectacularly well-kept grounds containing a mesmerising tidal pond in the centre, encircled by seating. There are also a number of restaurants in the district, but the main pull of this area is definitely its transport links to the rest of Tokyo.

The Royal Park Hotel is the ideal base for your stay in Shiodome.

Three close-knit areas with excellent transport links, including the Yamanote Line are Ebisu, Meguro and Daikanyama. What’s more is that these are districts which are particularly popular with Tokyo’s wealthier citizens. So if you are looking to live like a local for your short time in the Japanese capital, these are the areas to stay in.

With on-the-pulse hotels, bars, cafes and restaurants, in combination with attractive streets to meander through it’s the perfect location to get a feel for the real Tokyo. For the best neighbourhood coffee head to The Workers Coffee/Bar, a quaint little espresso bar, or PNB Coffee, a place picked up by Architectural Digest for its superb design. Both can be found in Meguro.

Head also to T-Site garden in Daikanyama, where lunch spots, galleries and bookshops are prolific, awaiting your exploration.For

For unique Japanese styling during your stay, choose the boutique hotel, Claska in Meguro.

This guide aims to break down some of the better neighbourhoods to stay in during a trip to Tokyo based on ease of reach to other areas of the city. It’s a city with such a wealth of experiences spread across its sprawling landscape that to choose a destination to stay based purely on attractions within close proximity is probably taking the wrong approach.

The best tip is to find a hotel that you really love close to the Yamanote Line or other important transport hubs, and then you can work out how to get to other areas of the city for day trips and attractions from there.

If you have any other points regarding the best areas to stay in Tokyo, let us and our know in a comment.