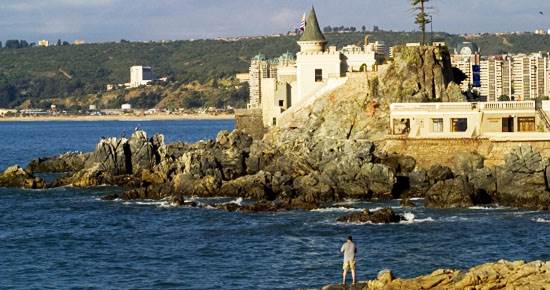 In a region of poets and tourist attractions, the coastal lands of Chile’s Fifth Region offer an excellent alternative for a rest only a couple of hours from Santiago.

It was not by coincidence that Pablo Neruda chose this area to live after returning from Spain. The poet bought a half-built property from an old ship’s captain in the area of Isla Negra, Valparaiso Region, in 1939, and turned it into a beautiful refuge with a spectacular view of the agitated Pacific Ocean.

But the winner of the Nobel Prize for literature is not the only one to have enjoyed this unending strip of land known for its temperate climate, cold water and attractive seaside resorts. The central seaboard, a coastal area that runs from the bay of Papudo in the north to the resort town of Santo Domingo in the south, has become an important tourist destination for Chilean and foreign travelers and is one of the most visited regions for going on vacation or just taking a few days rest because of its proximity to Santiago (approximately 2 hours). Year after year, thousands of travelers enjoy its white sands, woods and tourist attractions – from museums and handicraft fairs to extraordinary boutique hotels and restaurants specializing in fish and seafood.

How to reach the area? By land from Santiago take Route 68. There are also buses that can be taken from the San Borja Terminal, located in San Borja 184, Estación Central metro station in Santiago. The trip takes 1 hour and 45 minutes from Santiago, with departures every 15 minutes using the various companies that offer the service.

The following are some of the best-known resort towns:

Algarrobo
Known as “Chile’s Nautical Capital” because of its climate for practicing all types of water sports like surfing and sailing, this exclusive seaside resort is characterized by its calm environment and beautiful architecture. It holds the Guinness record for the largest swimming pool in the world in the San Alfonso del Mar Condominium. The best-known beaches are El Canelo, Club de Yates, Las Cadenas, Mirasol and Tunquén. The latter of these was used as a hippie refuge in the 1970s.

El Quisco
Named after the cactus known as the Quisco (Echinopsis chiloensis), which at the same times comes from the Quechua word khishka, this seaside resort is one of the most visited by Chileans and foreigners seeking days for rest and recreation. Its illustrious inhabitants include Pablo Neruda, who wrote his famous Ode to Conger Chowder in the local restaurant Chez Camilo; the renowned folk singer Violeta Parra, and the Chilean illustrator René Ríos Boettiger, Pepo, creator of the popular character “Condorito.” Some of its most visited beaches are El Quisco, Punta de Tralca and El Totoral.

Isla Negra
Though legally speaking it is part of the previous municipality, this resort town deserves a separate mention. This is not just because of its most well-known resident, Pablo Neruda, but also because of its rocky beaches, unparalleled view of a furious Pacific Ocean, and its atmosphere full of culture. In fact, Violeta Parra herself gave handicraft and folklore workshops in this area. “The sea seemed to me cleaner than the land, which is why I came to live on the coast of my homeland amid the great foam of Isla Negra,” the renowned poet once said when asked about the choice of his new abode.

Isla Negra is famous for its handicraft fairs, the Las Conchitas beach and the Museum House currently administered by the Neruda Foundation, where the large numbers of objects that the poet collected during his life are on display. The items that are admired the most include his collections of bottles and ship’s figureheads. His remains were also laid to rest here, along with those of his last wife, Matilde Urrutia.

Cartagena
This is one of the most popular and picturesque seaside towns on the central coast. The birthplace and the grave of the writer Vicente Huidobro, precursor of the literary movement of Creationism, its most renowned seaside resorts are La Playa Grande, San Sebastián, Costa Azul, and Lo Abarca, all with a temperate climate, cold water, and sweeping bays. In addition to its waters, Cartagena has cultural attractions like the aforementioned poet’s grave, declared a historic monument and located only a few meters from the house where the bard lived during his final years.

Las Cruces
If you want to enjoy nature, this seaside resort town is the most appropriate one for doing so. Part of the municipality of El Tabo, the town of Las Cruces is mainly known for its large sand banks, dunes, and Punta del Lacho, a lookout point from where you can see a good part of the central coast and where there is a protected marine area for scientific research. Travelers can enjoy Playa Chica, Las Salinas (scant urbanization and apt for bathing) and Playas Blancas, with gray sands that extend for several kilometers until joining up with Cartagena’s Playa Grande.

The painter Arturo Pacheco Altamirano lived here and the anti-poet Nicanor Parra has his house here.

The tourist circuit known as The Poets’ Coastline was created several years ago to boost tourism in the area and to rescue the existing cultural heritage and legacy. It is a tour that connects the visit to emblematic places that the different Chilean poets like the ones mentioned above frequented.

The tour includes the three seaside resort towns with the homes and museums to the great bards Vicente Huidobro, Nicanor Parra and Pablo Neruda, in addition to offering a list of public figures, places, and cultural activities on the central coast.