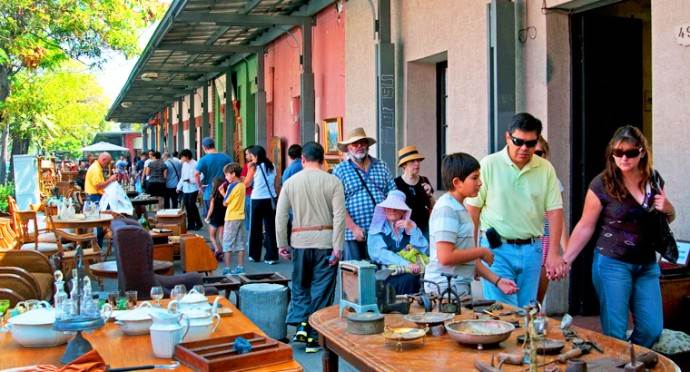 For years, the Lastarria neighborhood has been acknowledged as the primary cultural and gastronomical center of Santiago. Nevertheless, new cultural circuits have taken precedence in the city, one of them centered around the neighborhood known as the “Barrio Italia”.

Located between the Providencia and Ñuñoa communes, Barrio Italia extends around the avenue of the same name which lies a few steps from the Parque Bustamante subway station. Having been part of the countryside during the colonial era, the area’s urbanization process began after Chilean independence, already taking shape as a residential neighborhood at the beginning of the 20th century. Today one finds restaurants, designer stores, art galleries and much more on Italia Avenue and its surroundings, part of a route also including a great variety of architectural heritage.

Ex Teatro Italia (Old Italian Theater): Located on the intersection of Francisco Bilbao and Italia Aves., the Teatro Italia was built in 1936 by Marco Girardi and for several years was the main center for the neighborhood’s social life. The building’s Art Deco façade is regularly maintained and its facilities are used for various private parties.

Anticuarios Caupolicán (Caupolicán Street Antique Stores): On Caupolicán Street, located between Girardi and Condell, you can trace a nostalgic trail past the premises of the collectors and restorers who see potential in classical pieces of furniture. With dedication and hard work, they breathe new life into clocks, chairs and other items of the last century, making this area of the neighborhood the ideal place for interior decoration enthusiasts with a penchant for the classical.

Abraxas Galería y Librería (Abraxas Gallery and Bookstore): A unique space found on Avenida Italia 1152/3, Abraxas is not only a platform for promoting emerging Chilean artists, but also an outlet for culture in general, boasting its own bookstore that brings together various publications on both national and international art.

Café Anay: The story of this café began with the wish of its owners to offer an alternative space that organically combines design and gastronomy. The blend of provincial and urban vibes that the Barrio Italia offers made it the ideal place to unveil the café’s wholefoods-based menu. Among its highlights are quiches and organic empanadas (Chilean pasties) and a wide variety of coffees. (Avenida Italia 1238)

Fuente de Soda Rapa Nui (Rapa Nui Diner): On the Barrio Italia route there is also space for “picadas”, small diner-style restaurants where quality and price are in perfect harmony. One of these is the Fuente de Soda Rapa Nui, which during the 80s was the social hub of the elderly crowd who would meet to play dominoes and drink beer. With the establishment of the neighborhood as a cultural circuit, it has nowadays become a meeting place for local artists, actors and musicians.
In short, the Barrio Italia circuit deserves to be explored, taking advantage of its tree-lined streets that give it the mix of urban and rural air making it ideal for tours on foot or bicycle.