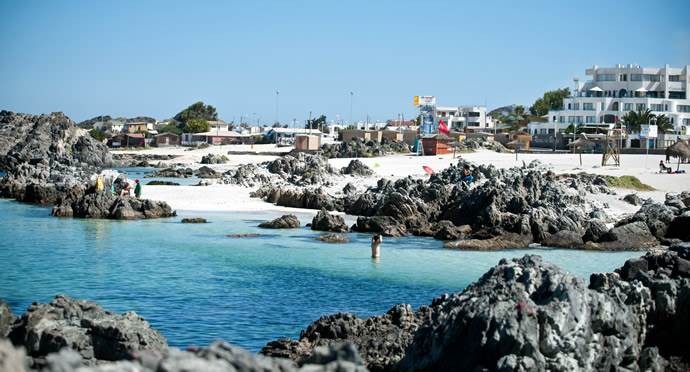 Many people believe that these warm-water beaches are some of the best throughout Chile’s extensive coastline.

Caldera’s coastline offers long and solitary beaches with white sand and turquoise sea, sunny weather every day and warm water. One of the most famous is perhaps Bahía Inglesa.

These used to be Chile’s northern border and home to the country’s first railway back in the 19th century. Especially popular in the summertime, is a part of the best beach circuit in northern Chile. Caldera and Bahía Inglesa, twin towns, are the ideal starting point for enjoying miles of sand just waiting for sunbathers.

The most important summer vacation destination in the Atacama Region, Caldera is a booming mining and fishing port. Scores of beautiful and uncrowded beaches are the city’s main treasure.

The city is located 75 kilometers northeast of Copiapó and 882 kilometers north of Santiago. Bahía Inglesa, in turn, is just 5 kilometers away from Caldera and both cities are joined by a fabulous bike lane inviting cyclists to get out and enjoy the area.

Caldera still showcases some of its 19th century architectural heritage, while Bahía Inglesa is the modern side of the coin, with a wide variety of lodging options and catering. Seafood cuisine is a major attraction in both cities. The food stands close to Caldera port or along the Bahía Inglesa coastal highway are not to be missed. These towns are interconnected by the Coast Highway which runs between at least three large bays featuring attractive beaches and amenities.