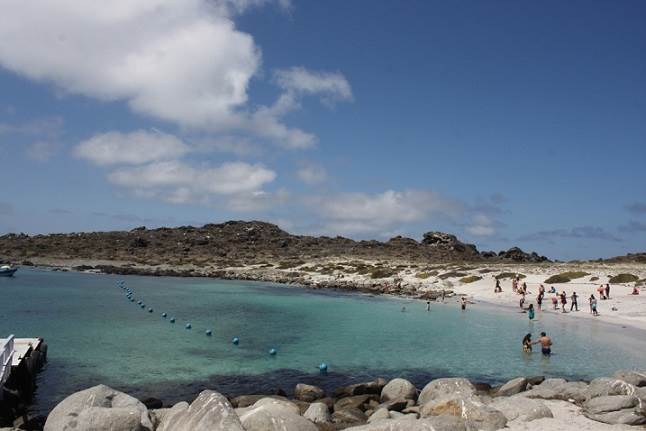 SANTIAGO — Burdened with a huge backpack, and an insufficient amount of sleep from the previous night, I was heading towards the Universidad de Santiago metro station, where I was supposed to meet my two friends, both called Lena. It was my first big journey here in Chile and I was more than excited.

Our first destination was La Serena, a city about 7 hours by bus from Santiago, next to the ocean. Around 6.5 hours later we arrived at the bus terminal of La Serena and after navigating the city we finally found our hostel, threw all the stuff onto our beds and started exploring the city.

This city is breathtaking: we loved the parks (the Japanese one is extraordinarily pretty), the long sandy coast and the lighthouse from where one can enjoy a wonderful sunset that illuminates the apparently endless sea. The coastline also provides numerous seafood restaurants along the beach.

The next day we got up early for our first tour: Isla Damas and Isla Choros. The area is known for its great variety of flora and fauna. We were crammed into a boat filled with Chileans and explored the rocky islands, admiring sea lions, different kinds of birds and – as lucky as we are –even dolphins ending up at a beach that seems to be taken out of a storybook. Surprisingly tired from this jam-packed day we all fell asleep on the night bus towards San Pedro de Atacama, one of the highlights of this trip.

San Pedro de Atacama is in the middle of the desert and it took us nearly the whole day to reach it. Once we arrived we hit the tourists agency and booked three tours for the next two days. Our program started at 3 a.m. the next morning, we searched for our warm clothes and got onto the bus, surrounded by San Pedro’s mountains. Outside the temperature was 5°C when I fell asleep and -2°C when I woke up.

Patio de Los Geysers is covered with smoke and dust from the holes that burst with soot from the rock melting temperatures underneath the earth. Breakfast on the bus was followed by a short bath in the hot springs after which you feel even colder than before, but fortunately the sun was coming out and the heating inside the bus warmed us up on our way down to the greener parts of the valley.

Driving back to San Pedro we saw the typical desert scene, arid and sandy. In the evening and after having a few ‘please wake me up again’-coffees we got onto the bus once again, this time in direction of the salt lagoons and lakes about 20 minutes from the city. The crystalline white of the salt was beautifully shining in the dry environment and the water inside glitters in light blue.

Swimming in the salt lake was nearly impossible as the high concentration of salt always kept our body up to the surface of the water. A few minutes after getting out I looked as if I was covered in a second, white skin that constantly and slowly crumbled from my body. As a perfect end to the day we had a pisco sour while observing the sun setting and plunging the mountain range into a sea of yellow, orange and purple. What they say is true, sunsets in the desert definitely have their very own magic.

Our next tour brought us to the Moon Valley, which is named for being the place on earth that looks the most like the moon. The scant landscape and the peculiar rock structure seem as if the canyons you walk through are on another planet. Unfortunately heavy rainfalls destroyed the road to Death Valley just before we arrived, so we had to skip this section.

Up next was Peru. Even though crossing the border was simple, we arrived two hours late in Puno, a Peruvian city at the Titicaca lake. The city of Puno, as beautiful it might seem with its bold mountains, is poor, the houses were half-finished, metal poles poked out of roof tops and the smell of rotting vegetables and dirt smothered the streets.

Lake Titicaca was beautiful though, even in the night. The next morning welcomed us with a bright and sunny sky, perfect weather to explore the lake a bit. So we took a boat to see the floating islands of the Uros. They are kept up by its inhabitants by cutting reed and adding it to the ground they live on. Apart from the beauty and the impressing simplicity of those islands, I was a bit shocked what tourism had done to the people’s lives. The whole time I felt a bit uncomfortable seeing little girls climbing up the boats and singing in various languages for the tourists. The hotel and even the club they had built on the islands was an intrusion on the native lifestyle.

Our next day we took the bus to Copacabana, in Bolivia, and from there the boat to la Isla del Sol where we took a tour around the south side of the island and learned about the traditions of the Incas. Although we weren’t that lucky with the weather, the stories told about it where amazing and when we headed back towards Puno we all were impressed and happy. Coming back and gaining two hours more just by crossing the border we killed our remaining time till the departure of our bus by enjoying the Peruvian Pisco and chocolate. We spent one more night on the bus and woke up in the famous city of Cuzco.

Seeing Cuzco is not like visiting the rest of Peru. It is full of ferias or little cafés, cute restaurants and hostels. As we had only a few hours in Cuzco till our bus to Ollantaytambu, we spent it walking through the tiny streets enjoying the first good cappucino in one and a half weeks and sharing our anticipation about the next big thing on our to-do list: Machu Picchu.

The same day we took a cab and drove to Ollantaytambo from where the trains to Aguas Calientes.  Peruvian women in traditional clothes, were blurs of color in the deep green fields, abandoned houses with colorful adverts on their walls and the sun bursting through the clouds like a giant flood light searching for its protagonist in the huge, beautiful stage of nature and tranquility passed us as we drove.

Once we arrived at Machu Picchu there was no way to compare what I had seen in my guidebooks to the structure in front of me.

Back in town we enjoyed our free drinks in the hostels bar and headed towards Cuzco again. The adventure was coming to a close, and we already were longing for home. After buses, airports, and customs I was finally walking down the street to my house. The backpack even heavier than before, the new bag around my shoulders and my sunburn from San Pedro still slightly itching when I finally unlocked the door to my room. And I was happy to be home once more.