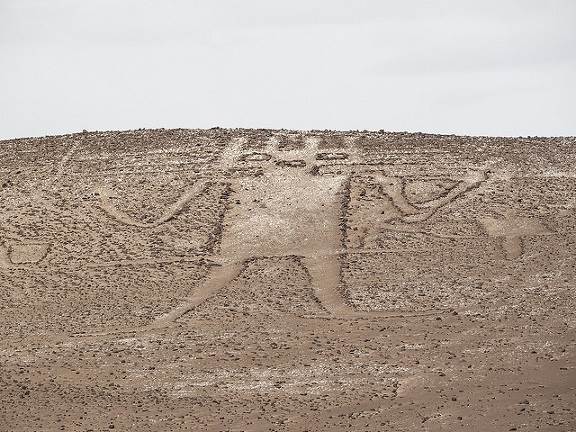 You can see it by the side of the Unitas hill, 52 miles away from Iquique. It’s called the Atacama Giant geoglyph, the world’s largest prehistorical anthropomorphic figure.

It’s 282 feet high and was made with a mixture of stones and soil, almost at the top of the Unitas hill, 52 miles Northeast of Iquique. It is now considered to be the world’s largest prehistorical anthropomorphic figure, and resembles the divinity that the area’s native cultures used to worship, from the XI to the XV centuries. In its right hand, one sees a giant’s crosier, and by its knees there are several decorations made with feathers which go to show his high hierarchy.

It’s one of the most impressive archeological treasures in Chile’s Northern regions; part of a group of 21 geoglyphs that are to be found in this same hill, located in an area known as Hoare. There are two panels, one facing South, with 12 geometrical figures and one zoomorphic shape. The other one, facing West, holds this giant and other geometrical shapes. In the province of Iquique, one can also find geoglyphs in areas known as Santa Rosita (near the town of Pica) and the Pintados hill. The latter is one of the world’s biggest natural murals, with 390 figures spread in sixty panels. It’s just one of several cave paintings that native inhabitants left behind between Arica and the Loa River. These also include pictograms and images over rocks (petroglyphs). Only the geoglyphs are exclusive to the coastal area of Chile’s North and Peru’s South.

All throughout what’s known as the ?Norte Grande? (about 310 miles), one finds prehistorical art over the hillsides. Any visitor can see them without much of an effort —no need for air views, like in Nazca (Peru)—, just by standing in front of the hills. They usually show human shapes, but also animals such as dogs, monkeys, serpents, birds, fishes or insects, and also some geometrical figures.

They are a valuable testimony of the odyssey that men had to go through in these lands, and of the daily living of the Andes’ people, who used to trade their products among regions or nations. Some experts think the signs helped them find their way at the roads. But there are others that associate them with rites connected to the sowing or harvest. Some historical geoglyphs are connected with the celebration of special dates, like the Republic’s first centenary or some of Pacific War’s events. Others represent Jesus’ suffering in the Via Crucis (Stations of the Cross), as learnt from the Christian missionaries.