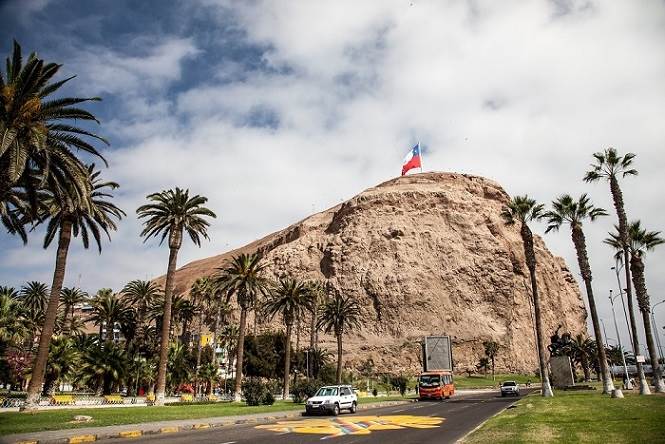 Arica is known as the city of eternal spring, an oasis in the middle of the great desert that fans out at the base of the altiplano.

Under the influence of the Pacific anticyclone, Arica is a fun and bohemian city, always true to its frontier spirit. It has beautiful beaches, an oasis, and a museum with mummies more ancient than those of Egypt. And it also offers you the chance to easily travel to the altiplano, to Lake Titicaca and Machu Picchu.  Arica is an open port city. Those who traverse Arica will be surprised how much lies above and beyond her limits.

One of the city’s main attractions is its port, where each morning marinated fish salad and shark sandwiches are served.

Another interesting venue is the neighboring handcraft market and the imposing cliff called El Morro, a symbol of the heroism and courage of Chilean soldiers during the Pacific War. El Morro today is an historic site with permanent exhibits.  Another important attraction is the Church of San Marcos, designed by Gustave Eiffel, and warm-water beaches such as La Lisera and Chinchorro. This last is an ideal spot for admiring a millenary fishing technique that dispenses with lures.

Along Chinchorro Beach, fishermen carry out an ancient practice of fishing aboard fragile fishing boats, just as the Indians used to do hundreds of years ago. It is truly worth watching.

Arica is a border city where the mixture of cultures is always evident. In recent years it has been frequented by surfers who ride its beaches’ huge and powerful waves, such as La Bestia (The Beast), one of the biggest in Latin America.

Arica is a strategic hub where adventure trips are coordinated. From expeditions to the extraordinary Azapa Valley and the Chilean altiplano (Putre, Lauca National Park, Salar de Surire or Surire Saltbeds), to trips to Lake Titicaca, Cuzco and Machu Picchu.

In the City of Eternal Spring there are at least two attractions no traveler should miss.  At night, the Kamisaraki folklore bar , where typical dishes like “Fillet of Llama” are served. Also typical drinks and, best of all, the Andean dance music that turns the bar into the best place ever for learning how to dance.

By day, there is the Feria Máximo Lira or Máximo Lira Fair, located to one side of the Arica-Tacna Railroad, beside the port that features Peruvian handcrafts, especially the reasonably-priced woven weavings of vicuña wool. And natural medicinal herbs such as uña de gato, maca and caiwa.

In the 1980s surfers began to practice their sport on the Island of Alacrán (Scorpion Island). Then others tried riding the waves in the beaches north of the city. A popular site for surfing and bodyboarding is the mouth of the Lluta River.

This is an authentic tourist enigma, between kilometers 72 and 73 on the highway that connects Arica to Putre. If you stop your vehicle along the slope, it will roll up on its won, without the engine running. Whereas some people say this is because the area is in a magnetic zone, others are convinced it is nothing more than an optical illusion. Give it a try and maybe you can create a new theory!

Codpa is a small town neighboring Arica. Each year, a likeness of Jesus the Nazarene is brought out for a procession along the town’s narrow streets. The men who bear the sepulcher, atop a table, are the Santos Varones (Holy Men) dressed in white hooded cassocks.

Belén is a locality in the altiplano neighboring Arica and its most important festival is that of San Santiago, or Saint James. This is when all the residents of the town open their doors and place tables outside, with food and beverages that they invite everyone to partake of for free. Later, brass bands play music while guaitías are prepared.  This is the high plateau version of the curanto, also called calapurkas. It consists of a spicy soup whose ingredients include chicken and llama meat, vegetables, and a stone that gives it its distinctive flavor.

On kilometer 88 of the highway that links Arica and Putre, a train car stands that is the home of the Troncoso-Chellew family. They are a hippy couple who, after having their first child, had no way to register him in the Civil Registry and so decided to found their own town under the Settlers Act. This is why they are the town’s only residents. The town is Mayllku, a curious place that offers visitors juice beverages, homemade bread and its star cocktail: the Eclipse Sour.

The Trip from Arica to Tacna

Cars or buses to Tacna, a Peruvian city on the border with Chile, depart from the Peruvian terminal on the corner of Diego Portales and Santa María streets, behind the Shopping Center.

The required travel papers for traveling to Peru are a valid passport, a salvoconducto or travel permit, or identity card, depending on your nationality.

The first checkpoint is at the Chacalluta border complex, 27 km (16 mi) from the terminal. The second is in Peruvian territory in the Santa Rosa complex, 1 km (0.6 mi) from Chacalluta and 35 km (27.7 mi) from Tacna.

The Chacalluta complex is open from 8:00 a.m. to 12:00 midnight, Sunday to Thursday. On Fridays and Saturdays it’s open 24 hours.

Another alternative to reach Tacna is to make the journey by train. The service is operated by Peru Rail, which was built in the nineteenth century by an English company, the trip of 62 kilometers between the two cities takes an hour and twenty minutes.