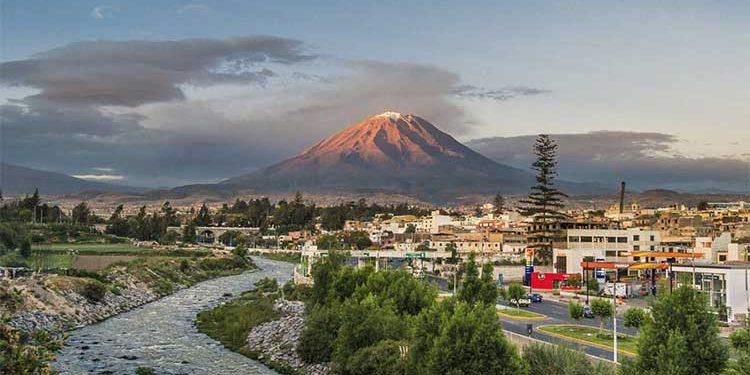 There is an air of magic and majesty in Arequipa, where the streets are lined with the ornate facades and epic archways associated with any great South American city. However, Peru’s second largest city is one of those locations that seems to have an indescribable character that captivates and inspires everyone who visits its cobbled streets. Every square appears more beautiful than the last, every historical building adds another layer of opulence and each winding cobbled street enhances the distinctly traditional feel that resonates through each paving stone. All of this occurs under the watchful gaze of the gargantuan, snow-capped Misti Volcano, whose white tip aptly reflects the pearl-toned architecture for which the city is known.

Where better to start in Arequipa than right at its heart in the Plaza de Armas, an impressive square dotted with gently leaning palm trees and flanked on all sides by some of the city’s most stunning architectural highlights. The square becomes lit up after sunset, causing the buildings to take on a shimmering visage, letting travellers truly appreciate how it received its nickname – “The White City”. There are a variety of bars and restaurants that offer rooftop views of the square as you sip on a cocktail. Watching the sun paint the buildings as it sets truly is a sight to behold.

As with the majority of colonial cities in Latin America, Arequipa’s streets house a number of impressive religious buildings that inspire appreciation from even the most secular individuals. Both the Arequipa Cathedral and the Iglesia de la Compañía are found on the Plaza de Armas. The grandiose facade and towering spires of the former make it arguably the city’s most impressive piece of architecture whilst the latter’s immensely detailed Jesuit carvings and ornate altar offer a different style of architecture at which to marvel. Perhaps the city’s most notable religious site however is the Monasterio de Santa Catalina, which travellers can visit for a small fee. The labyrinthine structure allows visitors to gain a greater perspective on how the former nuns of this monastery lived, with access to the humble living quarters and soothingly peaceful gardens.

Those with an invested interest in the Incas cannot miss the opportunity to visit Juanita, the “Inca Ice Maiden”, at the Museo Santuarios Andinos. The museum boasts an impressive collection of Incan artefacts related to the central theme of mummification. However, the main focus is undoubtedly the miraculously well preserved remains of a young Incan girl, who was sacrificed to the gods over 500 years ago before being discovered on the slopes of Mount Ampato in 1999. This experience, which is always done by a guided tour of the museum, is as intriguing as it is harrowing.

Yanahuara is a district to the west of Arequipa’s centre that inspires tranquility through its quieter streets and pockets of greenery. However, the prime attraction is the viewpoint located at the apex of the neighbourhood’s church. Grand arches of white sillar provide the perfect frame through which to view the volcanoes that surround the city of Arequipa. The experience is at once peaceful and awe inspiring.

With regional delicacies that are sure to entice foodies through their eclectic ingredients and obscure appearance, Arequipa is an excellent city in which to sample food that often cannot be found elsewhere. The more popular dishes include rocoto relleno, peppers stuffed with beef, cheese and vegetables and then roasted, and pastel de papa, a layered savoury dish made with potatoes, eggs and cheese. These dishes are often served together and have in fact proven so popular that they are now widely available across Peru.

International restaurants are also easily located in Arequipa, with pasta, burgers and salads of the highest quality readily available for anyone reluctant to sample the local cuisine or simply searching for a taste of home.

The answer to this issue is relatively simple – due to all of its notable sights being located within close proximity of each other it is easy to walk from A to B in Arequipa. This also has the added bonus of discovering the city’s hidden gems whilst en route. Due to its small size and relatively flat streets cycling is also an appealing way to see the city. Bike rental shops are both common and cheap.

For those that require a form of transport, taxis are extremely common throughout the city and very affordable.

Alternative things to do in and around Arequipa

Located in a desert found in the Andean heights, the natural scenery surrounding the city of Arequipa is diverse and enrapturing, as are the activities that can be carried out here. There is enough here to keep the adventurous of spirit enticed for weeks on end, but also pastimes that are ideal for soothing the soul, thus ensuring all genres are kept happy.

Take an afternoon to ditch the regal architecture of Arequipa’s touristic centre by exploring the winding paved streets of the historic barrio of San Lazaro. Whilst some of neighbourhoods have veered from the traditional roots, the endearing homes of San Lazaro are still made from sillar, the white rock that led Arequipa to be named the White City.

Virtually unchanged in over 450 years, many of the original squares and narrow alleyways are still as they were at the time of the city’s founding. Wandering through San Lazaro will give tourists a taste of the real Arequipa.

Climbing the slopes of Misti Volcano

The domineering presence of the city’s volcanic neighbour may seem an intimidating sight at times but it is in fact possible to climb to the crater at its summit. The trek takes 2 days and one night, ultimately reaching altitudes of 5,825 metres above sea level, meaning that acclimatisation training is a vital part of the preparation process.

This is a trip for the more adventurous traveller and the rewards for reaching the top are well worth the climb. Upon arrival at the summit you will be treated to not only the experience of standing on the brink of the steaming crater of an active volcano but also the mesmerising views of the surrounding Andean landscape.

Visiting the gorges of the famous Colca Canyon

Undoubtedly one of the natural highlights of any trip to Peru, the Colca Canyon is located just a few hours north of Arequipa. A location that gives perspective on our comparatively miniscule stature on this planet, the sheer rock faces, dramatic valleys and dissecting river of this region have drawn the attention of adventurous travellers for decades. Not only is Colca one of the deepest canyons on the planet, but also an excellent place to witness Peruvian wildlife including wild llamas and the dark, swooping figure of the Andean condor.

The canyon caters for adrenaline junkies in the form of activities such as Mountain biking, white water rafting and horseback riding. Whilst those seeking a more rejuvenating experience can pay a visit to the natural hot springs or Sangalle, a paradisiacal oasis in the middle of the desert.