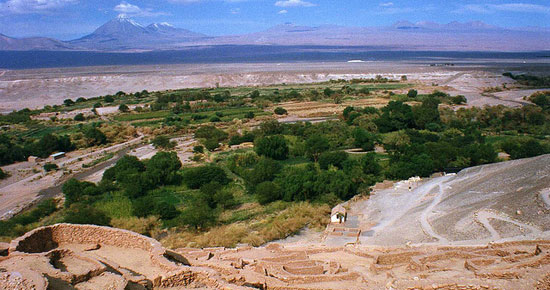 The Pukará de Quitor ruins are one of the country’s greatest standing monuments to the rich pre-Columbian heritage of northern Chile.

Perched on the sandstone cliffs of a river valley in middle of the Atacama desert, within walking distance of the popular oasis town of San Pedro, lies one of the archaeological jewels of Chile. The Pukará de Quitor ruins are a testament to the sophisticated indigenous cultures of northern Chile and the central Andean regions of Peru, Bolivia and Argentina – and a must-see for visitors interested in the region’s history and culture, as well as its stunning natural beauty. Built some time in the 12th century by the Quitor community, the Pukará was a fortified town designed to protect the fertile river valley of San Pedro from the neighboring Aymara people. The complex stretches some 230 feet (70 m) from the valley floor to the lookout perched at the top. It covers around 618 acres (250 ha) and consists of over 160 buildings, including former houses, granaries and watchtowers. It was built entirely of small stones held together by mud, and although the roofs have disappeared, the walls still stand. Many buildings are so well preserved by the arid desert conditions that they are not so different from when they where still a family home or community meeting place. The ancient town culminates in a rocky peak that offers sweeping views of the lush river valley and the desert beyond,  running unbroken until it reaches the imposing wall of the Andes with their imposing, snow-capped volcanoes. Pukará de Quitor is located 1.8 miles (3 km) northwest of San Pedro de Atacama. With a well signed and flat path from the town, it is easily reached on foot, or by hiring a mountain bike in town. The San Pedro valley beyond the ruins can be further explored and offers an incredible day-trip or afternoon activity. Its network of winding canyons is sometimes so narrow that walkers must approach in single file, while other parts are wide enough for an impromptu game of soccer. Further down the valley is a small cave adorned by two huge stone heads, carved into the rock in memory of the Pukará de Quitor leaders beheaded by the Spanish when they sacked the town in 1540.