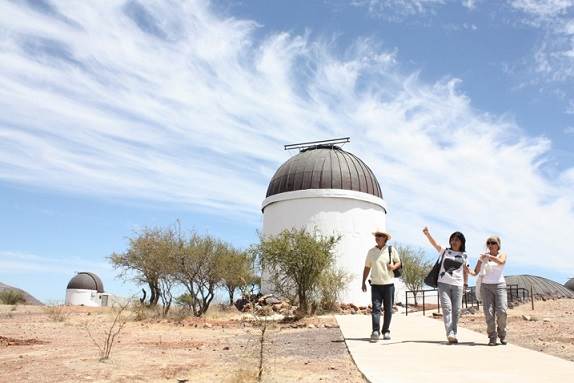 A quartz mine exploration, petroglyphs and an astronomical course in the Southern Cross Observatory were included in the latest “Star Trek Chilean Tour” in Combarbalá in Chile’s fourth region.

COMBARBALÁ — Chosen as one of the seven wonders of the Coquimbo Region, the Southern Cross Observatory is the highlight of the “Star Trek Tour 2013″. The Chilean version compares the science fiction television series with a three-day astronomical trip suitable for all ages and nationalities.

Juan Casas, General Manager of tour operator Beta Consulting, says: “This is a comprehensive service that covers transport, accommodation, planning and guides. The traveler only has to worry about their luggage”.

Casas told I Love Chile that the Chilean sky is ideal for starting the new concept called “Astroturismo“. That means, teaching astronomy from significant tourism experiences for the traveler. Here is a guide to this unforgettable panorama.

To disconnect from the stress of the city, a visit to the quartz mine to the northwest of Combarbalá, 200 kilometers from Ovalle, allows you to enjoy the silence and receive mineral energies. Pilates teacher Paula Aravena told I Love Chile she visited the mine because, “Quartz is used in the alternative medicine like a positive energy conductor”. During the visit you can collect some quartz spread on the field as souvenirs.

Another must-see stop is a visit to the only remaining underground mine in Combarbalá: “The Rosita Mine” in the Peralito Hill. The Combarbalita mineral was declared as national stone in 1993 by the Government of Chile, replacing the Lapislazuli mineral. The semi-precious mineral is composed of clay, quartz, copper and it is only possible to observe in Chile.

DAY #2: Not only for Astronomy lovers

The Southern Cross Astronomical Observatory is the unforgettable moment of the whole trip. Its four observation domes (Alpha, Beta, Gamma and Delta) are arranged just as the Southern Cross constellation, which is useful for guidance as to determine the cardinal point south.

The morning visit includes an introductory course to astronomy, realized for the astronomer Fernando Franco Blue and during the night you can observe Constellations like Orion, Alpha Centauri and planets like Saturn and Jupiter.

60-year old Angel Espósito  was born in Buenos Aires. After working 12 years in Patagonia enjoys traveling through Chile and South America: “I decided to take this tour because I love astronomy and I want to learn more about north of Chile ” he said to I Love Chile.

In March The Southern Cross Astronomical Observatory will inaugurate the first planetarium projector, which was donated by a museum in Ohio and projects images of planets, stars and moon phases.

The tour ends with an exploration of the “Cave of the fugitive.” According to legend this refuge was used like hiding place with the only Combarbalá prisoner that the police never found. The two rocks that make up the passage challenge the courage and tolerance for tight spaces.

If you are an archaeology lover you´ll enjoy the visit to “the Chilcas Corner” with more than 20 petroglyphs. The drawings on the carved stones are up to 3,000 years old and represent human figures and astronomical representations of the Diaguita and Molle cultures, located in the north of Chile. The land is owned by Gabriel Tapia, a local farmer, who studied astronomy at the planetarium at the University of Santiago de Chile.

The tour ended with a visit of the city where you can buy Combarbalita handicrafts and some handmade cheese.

Casas told  he hopes the astronomical tourism industry can build to include events such as outdoor concerts and scientific congresses to disseminate Chilean astronomy.