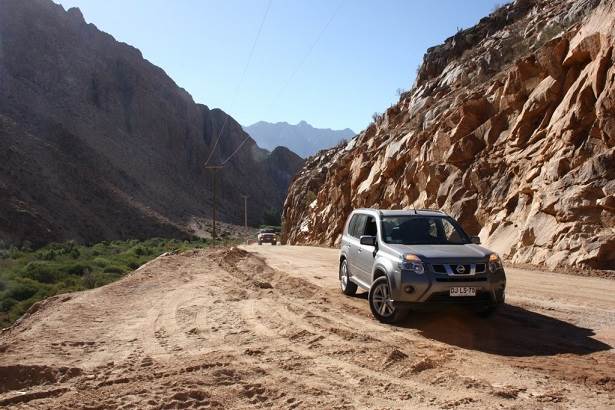 LA SERENA– As we said travel broadens the mind, but youth means small budget and small budget means no hostel, nor restaurant and good plans without restraint. That’s why we wanted to save on the transport spending, and tried the primary mode of travel: hitchhiking.

Aside from the cheap reason of this way of locomotion we wanted to meet different people and we did it successfully! Miner, agricultural engineer, retired chemical engineer, police officer, housewife, tourists, families, as many people as different cars; we had the chance to have unusual encounters.

We arrived at the bus terminal of La Serena early in the morning, like lost sheep in an unknown city. But as we always said “Nothing ventured. Nothing gained” we took our courage in both hands and we tried to stop our first car. In fact at the first time we just asked to a man some information about the right direction to go to the Valle de Elqui and in a natural way the driver dropped us until the strategic point on the road to Vicuña.

After a few fails and many whistles a car stopped and we jumped into it. Our first hitching was the best one, a really good meeting. We expected just to go further in the Valle but our nice driver became our guide, sharing his breakfast and telling us stories of the valle. What a wonderful surprise! We were lucky that this man works in this area and wasn’t hurrying to go to work so we took time to take pictures and talk about our lives. We spent an hour and a half with him, discovering wonder-struck the aridity and the drought of this area in comparison with the stretch of green vineyard, asking for the best places to visit. One criterion of the hitchhiking is the free fare, but we were so grateful to our driver that we offer him a fresh juice in a village. Finally he had to go to work, promising us to take us back on the night to help us to find a camping for the night. Again we didn’t expect so much.

First try first success, the beginning of a big adventure

After a visit of the village we wanted to freshen up near to the river, on people’s advice, but the best place was 10km away, and under 33°C in a desert (in the literal sense). Luckily one car took us and just after introducing us we arrived to the river. Same luck on the way back until the place of the village where we expected our first early driver. Thirty minutes later (Two Chilean hours later) our driver-friend took us and insisted to make a detour to drop us at the camping. Stunned by so much kindness we couldn’t believe it, even when he called us 10 minutes after to know if we were well-installed.

Being in Valle de Elqui without going to an observatory is a little stupid so we went there but the ticket price was one of our most important expenses that’s why timidly we asked to a couple (which also went to the observatory) if they can drop us with them. By sheer coincidence they spoke French and were from Santiago, spending a weekend in La Serena too, we remained our souvenirs of France together during the journey as if we know each other since ever.

New day, new motivation, new hitchhiking. After walking 30 minutes to a strategic point (gas station) most of the drivers sound their horn, screaming “Hola guapas!” and other sexist euphemism, others agitating their hands to say that they are sorry but they turn on the next intersection. Twenty minutes later 3 young men drop us from Vicuña to Paihuano.

The Same questions: Where are you from? What are you doing in Chile? So many interrogations about these hitch-hiker “gringas”. So same answers: We are French, in Chile since July and September, both studying journalism, spending our weekend in Valle de Elqui… Bla bla bla. They were a rock band, one of them tried to speak English before understanding that we can speak Spanish.

But once abandoned in the village there were nobody, only two dogs and a disused road. After a long time waiting, a car stopped and we jumped into it without knowing what kind of people were there. It was a strange situation; the driver seemed drunk and proposed us to smoke… Hopefully the journey was short and we got off the car in Montegrande. We were quiet desperate after waiting so long time that’s why we decided for the first time to take the bus (500 pesos) to Pisco Elqui. Me and my friend agreed that we deserve a good meal and we chose a quiet cheap restaurant. After a touristic (free) tour in the city we hitchhiked again to down to Montegrande. A couple of tourists took us but they didn’t speak to us, and quickly we found other people.

Two retired engineers, who wanted to see the area and its materials, drove us until Valle de Cochiguaz but the journey became a safari. We stopped many times for taking photos but they didn’t want leave us without a place to sleep. But the fact was that we didn’t want to pay a camping but camp on unauthorized sites in a wild part.

Finally we got rid of “our grandfather-drivers” and we began looking for a wilderness camping. But it was more complicated than what we expected and before dark a couple took us in their car, thinking we were lost. They were there to celebrate their first year together, with a good situation in Santiago, asking how can we camp and eat without camping equipment. But it was fun, the night went as planned, except my yogurt which was stolen by an animal during the night.

In the morning we didn’t easily find a car so we walked, and finally a family took us. We were a bit cramped in their car, between children, beach towels and our bag pack. We came to the small village and painfully it was when the team Colo-Colo had a play so once again we were waiting for a car. Our hero came and helped us in our route to La Serena but he dropped us in a disused road and we had the choice between no car or car driven at 150 km an hour.

If we have to define the hitchhike we can say that it’s a gesture which involves extending the hitchhiker’s arm toward the road and sticking the thumb of their outstretched hand upward with the hand closed. To say it more simply itinerants use a gesture where the index finger is pointed at the road but in our case we almost danced on the road to stop car. It wasn’t a rain dance but it came to the same thing. And suddenly a tuning car stopped for us. It was a young couple with a baby who ate an ice-cream which was more on his t-shirt than in his mouth. Anyway we were a bit scared because the driver played a “car-game” with another tuning-car but we finally arrived safe to the beach at La Serena.

After meeting so many different people from La Serena, Santiago, France, Antofagasta, hippies, tourists, couples, families, in the most natural way we granted ourselves an Arabic coffee and tea near to the lighthouse of La Serena. Who’s say that French girls are not adventuress and polyvalent?