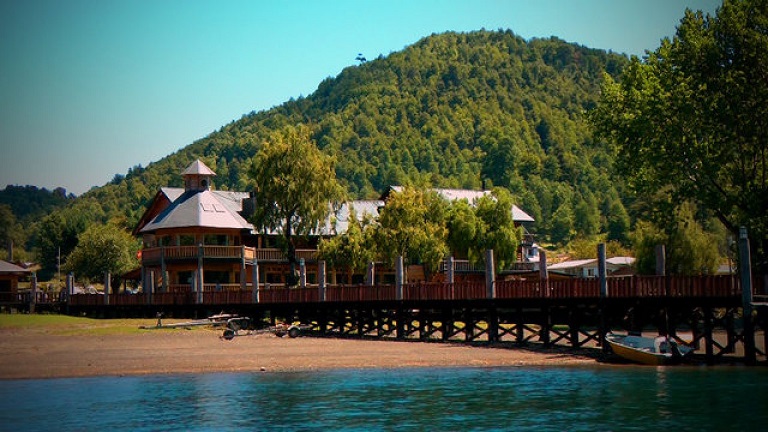 This is the first of a series looking at a trio of award-winning Santiago restaurants and how they have contributed to the capital’s ascendant gastronomy. Today is seven-year-old seafood classic Puerto Fuy, where modern French techniques meet traditional Chilean cuisine.

Puerto Fuy and its chef, Giancarlo Mazzarelli, have been consistently ranked among the best restaurants and cooks in the city by El Mercurio and the Chilean Food Writers’ Circle, also garnering attention from major American magazine Travel + Leisure.

Influenced by years spent cooking in the Dominican Republic, France and England, Chef Mazzarelli’s creative seafood preparations, influenced by traditional Chilean cooking styles and inflected with modern techniques, made a splash when they first appeared on the plates of adventurous Santiaguinos.

Seven years after Puerto Fuy’s opening on the leafy uptown avenue of Nueva Costanera, the street has become the hub of a newly dynamic Santiaguino gastronomic world.

Puerto Fuy defines itself, amongst all the new competition, as the stylistic middle-man. “Our food is not very classic and it’s not very modern,” Mazzarelli says. “We’re right in the middle.”

A modern spin on the riches of Chile

Mazzarelli describes his cooking succinctly as ‘Modern French.’ A starter of scallops over spring pea puree with lemon sauce is decidedly continental, and a dish of Patagonian Hake over ratatouille and yellow tomato coulis is a pitch-perfect Niçoise classic. A froth of musky, vegetal nori foam on top glances toward the more precious traditions of nouvelle cuisine. The dish is both classic and modern, perfectly balanced at the nexus of two traditions.

In a country where traditional cuisine rarely strays far from grilled meats, fried fish and stewed shellfish, Mazzarelli’s approach is not obviously recognizable as Chilean. Yet there is no mistaking the chef’s serious commitment to his homeland’s bounty – Puerto Fuy is a veritable grocery list of the finest food and drink that Chile has to offer.

Warm, flavorful breads from local bakery Le Fournil are served with olive oil produced in the Colchagua Valley. Still water is bottled by Aonni from a 10,000-year-old aquifer near Punta Arenas. Fish and shellfish come from up and down the Chilean coast and the carefully curated wine list features almost exclusively Chilean makers.

In some dishes, like the starter “Textures of Abalone,” Mazzarelli uses a uniquely Chilean ingredient (abalone, known locally as locos) to play on traditional preparations. In this three-part dish, Mazzarelli offers his version of regional classics like ceviche and locos with mayonnaise, rendered as a buñuelo (or fritter) of abalone, mayonnaise and various herbs, and served with a sauce of cilantro, parsley, olive oil and capers. “We try to include some more traditional Chilean dishes,” Mazzarelli says, “but done in a different way.”

The rise of Chilean cuisine

When Puerto Fuy’s Chef Giancarlo Mazzarelli returned to his native Santiago in 2002, the city’s dining culture was restricted to a handful of traditional Chilean restaurants and a single shrine to classic continental cuisine.

Today, the strip of Nueva Costanera where Puerto Fuy stands offers an international smattering of trattorias, cevicherias and steakhouses. The culinary landscape of the city has changed beyond recognition, thanks in no small part to Puerto Fuy. “In the beginning, everything we did was different,” Mazzarelli says. “Eight years ago almost every place here just made typical Chilean food.” Clearly, things have changed.

A new generation of innovative chefs has moved up through the ranks bringing a fresh battery of techniques learned in kitchens around the world. Mazzarelli and Puerto Fuy are no longer at the vanguard, but then, they don’t need to be. The expert staff, the quiet, warm intimacy of the space, a well-stocked bar and above all excellent and satisfying food all conspire to induce a state of absolute comfort and calm.

Mazzarelli has had the good fortune of not only observing, but also playing a formative part in the birth and creation of this new Santiago dining scene. “Before, no place really did anything different and that’s why I wasn’t working in Chile,” Mazzarelli says, glancing across the dining room of his flagship restaurant. “I returned to Chile at a good time.”