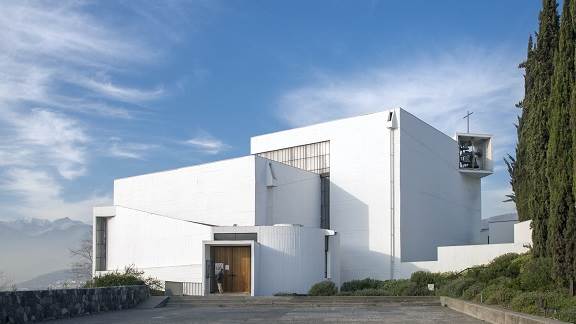 When visiting Santiago, anyone and everyone interested in exploring its architecture is sure to notice not only its elegant, historic downtown buildings, but also the increasing exemplars of modern architecture scattered throughout.

Modern architecture in Chile dates back to 1920s, prior to which it was mainly home to neo-classical architecture, inspired by 19th century Europe, which dominated the scene. In fact, Chile was one of the first countries in Latin America to adopt the modern style.

Much like the historic buildings of downtown Santiago, modern works have influenced the course of the city. Here are some of Santiago’s most prominent and impressive examples of modern architecture.

The unusual former monastery, with its cube-shaped chapel, was designed by architects Gabriel Guarda and Martín Correa. Completed in 1964 and declared a National Monument in 1981, it is open daily to curious visitors.

Its location, perched on a hillside at the edge of the residential suburb of Las Condes in eastern Santiago, means it retains the aura of a well-kept secret. It is this simplicity that attracts attention to the light and shadows that playfully yet precisely penetrate the chapel, through the angles and corners created by its walls. As natural light enters the slits of the walls, the roof appears to float above the rest of the structure.

Entrenched against one of the chapel’s white walls, fragments of wood have been intricately placed together to give the powerful impression of the figure of Virgin Mary holding Christ.

A joint project between architects Alejandro Aravena, Charles Murray, Alfonso Montero and Ricardo Torrejon, the Siamese Towers are just one of the modern structures in the San Joaquin campus of the Universidad Católica in Southern Santiago.

The tinted glass tower distinctly forks in two near the top, hence its name. The concept is a building suitable for housing anything related to computers, a necessity in today’s digital age.

To this end, the tinted windows create a semi-light in the space, with the aim of avoiding reflections that make using computer screens uncomfortable.

A striking feature is the separation between the building’s outer glass skin and the internal volume of the tower, with an elaborate web of aluminum pillars supporting and holding the two together.
Centro Cultural Palacio de La Moneda, Palacio de La Moneda

This museum, completed in 2006 by Chilean architect Cristián Undurraga, includes two main exhibition spaces, as well as a film archive with movie screenings, a digital laboratory, two cafés and a restaurant.

The huge space is impressively bright, considering that access to the museum is subterranean, through a ramp on the Southern side of Palacio de La Moneda. Natural light streams in solely between the rows of concrete beams that are fixed parallel to the ceiling.

A stand-alone characteristic is the long ramp, with a glass balustrade that leads to the lower floor plaza. An animated way of accessing the lower level exhibition rooms, it makes movement in the museum visible from every angle, a refreshing alternative to hidden and dark staircases.

The initial building was inaugurated in 1972 to host the Third United Nations World Conference on Trade and Development but, following a major fire in 2006, the center’s design has noticeably advanced.

Reconstructed by Cristián Fernández, the architect sought to divide the complex into three parts, rather than keeping it as one large mass.

A continuous roof structure, cladded with perforated weathering steel, hovers over the entire site. At street level, this allows for public spaces to be created between the three separate volumes, allowing for people to flow freely between these.

The building includes a theater for 2,500 people, a dance studio, exhibition hall, library and more, playing host to both national and international acts, exhibits and festivals year round.