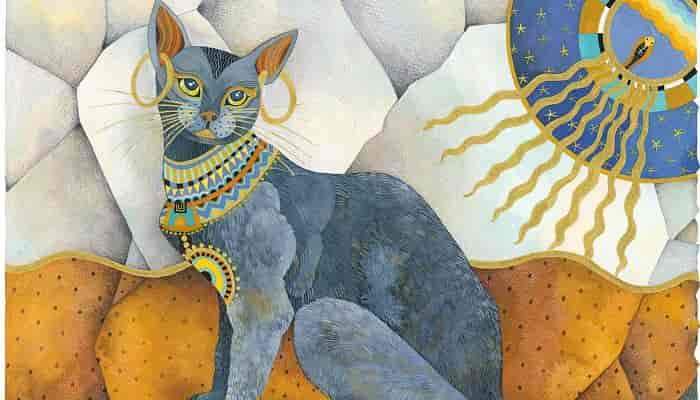 Love cats and travel? Of course you do! Here at Tucan Travel we are cat-egorically in love with all things feline. What better way to celebrate the launch of our updated Egypt tours than to share these 9 crazy facts about cats. Though, to be honest, we would be  happy to talk about cats even without the launch!

As any feline fan will tell you, cats have nine lives, and they needed all of them to get by in ancient Egypt as they were kept by royalty and commoners to hold the snakes at bay. Some historians believe that cats copied the snakes’ hiss, to tell predators to beware!

Cats and snakes were so embedded in Egyptian culture that they combined the two in a popular board game. Archaeologists excavating the ancient tombs at Abydos found the snake game, mehen in a king’s tomb. Made of a limestone board in the shape of a coiled serpent, the game was meant to be played by up to six people. Each player had a figurine of a lion carved out of ivory. These games have been found in many other tombs amongst the ornaments and furniture necessary for the afterlife. If you think packing for a two week holiday is hard, imagine packing for an eternity!

Did you know a rearing cobra can be seen on the crowns of the Egyptian Pharaohs? Known as Uraeus, the cobra represents the god Wadjet who was patroness of the River Nile and protector of Lower Egypt.

Cats have been living alongside us long before they were trending on Instagram (86 million posts last time we looked.) We have been besotted with them for thousands of years.

Many of the ancient Egyptian gods were depicted as cats, or as humans with a cat’s head. Gods such as Mafdet, meaning ‘she-who-runs’, guarded the Egyptian Pharaoh’s private chambers against snakes, scorpions and all things evil. Images from 5000 years ago show her with the head of a leopard, cheetah, or lynx. Her hair was often braided with scorpion tails and she would be shown wearing a headdress made of snakes.

She was also the goddess of execution in the Old Kingdom and was shown as a cat running up the side of the staff of the executioner. Worshippers believed that she would rip out the hearts of criminals and blasphemers and drop them at the feet of the Egyptian Pharaoh – a bit like Tabby proudly dropping a mouse at your feet at breakfast!

Whilst Mafdet was honoured in the north of Egypt, Bastet was the goddess of warfare in Lower Egypt .She is shown in different forms as a lion, as a human goddess with the head of a cat and also as a black cat. Our cute and fluffy friends are also fierce fighters, and Bastet was said to have inherited her fierceness from her father the sun god Ra. Legend says that he sent her to Nubia as a lioness to ‘let out her rage’ and when she returned she was the friendly (ish) cat that we know today.

Bastet was also worshipped as the goddess of fertility. Cats can have up to 12 kittens at a time and Egyptian women believed that her worshippers would be blessed with large families. Midwifery was already seen as a highly skilled role in ancient Egypt. Some of the oldest known images of the tools used in ancient midwifery can be seen on the walls of the temple at Kom Ombo.

Dancing till the house burns down

Some statues show the goddess Bastet as a black cat accompanied by a kitten holding a rattle. The rattle was thought to be a musical instrument known as a sistrum. Because of this, the goddess was associated with music and dance and many sistrums would be decorated with by the figure of a cat.

No celebration in ancient Egypt would have been compete without a lot of music, singing and dancing. Whilst some Egyptians thought cats could ignite your fire and make you dance, others thought they could extinguish fires. They believed that a cat running through a burning building would be enough to put the fire out. Because of this, Bastet became the goddess of firefighters.  Other stories tell of ancient Egyptians surrounding a house to prevent cats running back in.

The Greek writer Herodotus said that when a house cat died the whole household would shave off their eyebrows and would remain in a state of mourning until their eyebrows grew back.

It wasn’t all fertility and fun though in ancient Egypt. When the ancient Persians set their sights on conquering Egypt they used the Egyptian love of cats against them. The Persian army of King Cambyses II had images of cats painted onto their shields. The legend is that the ancient Egyptians were afraid to fight in case they were seen to be attacking cats. At the height of the cult of Bastet, the penalty for killing a cat, even accidentally, was instant death!

Cambyses’ victory was the beginning of almost 200 years of Persian Pharaohs and he was said to have thrown cats at the Egyptians as he paraded through Pelusium on his victory parade. Hmm, we aren’t so sure we like him.

Pharaohs typically showed their victories in huge scenes carved into walls and temples. Cambyses was a minor Pharaoh and there are few images of him remaining in Egypt.

That couldn’t be said of Ramses II. Known as The Great Pharaoh, he was one of the most prolific builders and show offs, of the Pharaohs. Ramses was also a cat lover and was known to keep lions and cheetahs as pets and guards in his palaces. He was thought to have taken his favourite lion with him to the Battle of Kadesh. Images of this battle can be seen in Abu Simbel, Luxor and Karnak – which we visit on our Egypt tours.

Legend has it that both the goddesses Mafdet and Bastet originated from Mau a jungle cat who protected sacred trees from a serpent by capturing it and cutting of its head.

The ancient Egyptians did not distinguish between the wild cats or the (slightly) less ferocious domestic ones. Cats were cats and they were all known as miu or miut . The name is thought to represent the sound they made, what we know as meow. Miu translate as “he or she who mews”. Little girls were often referred to as muit, literally cat. Which shows how women, in flesh and in their guise as cats, where to be respected.

If you look carefully on the walls of tombs in The Valley of the Kings, you can see Egyptian cats sitting underneath their mistresses chairs. They are there as protection, but also as a symbol of the peace and prosperity of the household. By killing snakes and other unwanted vermin, the Egyptians saw the cat as bringing order from chaos.

Cats are really good at riddles

The Great Sphinx of Giza may have been built by Khafre to stand guard at the foot of his great pyramid. With the body of a lion and the head of a man, the Sphinx is carved from one solid bedrock and is 240 feet long and over 60 feet high.

The ancient Greeks described a Sphinx with the body of a lion, the wings of an eagle and the head of a woman. The Great Sphinx of Giza guarded the ancient city of Thebes and she challenged all travellers who came her way. If they answered the riddle she would let them pass. If they got it wrong, she ate them.

What goes forth on four legs, two at midday and three in the evening? The answer is man; he crawls on all fours as a baby, walks upright on two legs as he grows, and then uses a stick in old age.

You may have your own theories about the Sphinx, but at least you know the answer to the riddle before you go!

Cat-acombs,  till death us do part…and a bit longer

Saqqara is home to one of the oldest pyramids in Egypt, the step pyramid of Djoser.

As excavations have continued at this historic site, archaeologists have continued to find dozens of cat mummies and statues decorated with gold. Whilst humans were mummified to preserve their bodies for the afterlife, the ancient Egyptians mummified cats and other animals as an offering to the gods, seeking forgiveness or favour.

It is thought that priests owned large catteries and ran very lucrative trading network. These networks supplied food for the cats and kittens  when they were alive as well as oils and resins for embalming them when they died. Recent imaging, however, have found that not all of the cat mummies contained the body of cats. It may have been that demand simply over took supply, and after time just depicting the cat in the shape and decoration of the wrapping was enough to get the goddess’ favour .

Vast numbers of cat mummies are still found in Egypt today, even in tombs that have been raided in antiquity. These mummies may have survived because the tomb robbers respected the cat goddess more than the Pharaohs, and remained a little bit scared of her revenge!

Because you love cats and travel, we also know you love to read. Who could possibly give the last word on cats but one of our favourite authors, Terry Pratchett.

We will leave to Iposlore the Red and Death, Terry Pratchett’s famous character. This is from the book Sourcery (Harper, 1988) a story combining wizards, warlocks and mayhem.

“I meant,” said Ipslore bitterly, “what is there in this world that truly makes living worthwhile?”

Death thought about it.