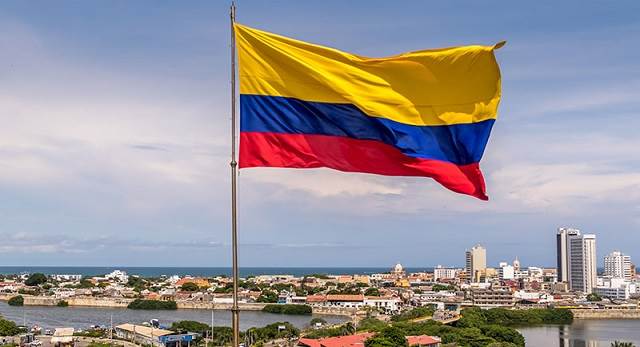 There’s not 5, not 10 but 8 (yes, we went there) reasons you really shouldn’t save up your hard earned cash to visit what was once voted the happiest country in the world. I mean, why would you want to put up with the loud salsa dancing on the streets of Cali, endless mountains and all that coffee? Let us tell you why…

Colombian’s love Christmas. So you’ll need to mentally prepare yourself for streets and streets of bright lights, nativity scenes and epic displays of candles and illuminations all across the country. December 7th is where it really kicks off with what is known as Dia de las velitas (day of little candles) where everywhere from homes to town squares are decorated with candles, lights and decorations in what can only be described as an explosion of Christmas.

A popular tradition that also takes place throughout the festive period in Colombia are Novenas, where families and neighbours also come together to pray and sing Colombian Christmas carols. You’ll often see scheduled Novenas taking place in public places such as shopping centres and parks where local schools and communities get very Christmassy and share traditional Christmas food like Natilla, a sweet custard ‘flan-like’ pudding that is usually served with shaved coconut on top. Expect smiling children and festive parades for an entire month if you visit from end of November onwards. Bah humbug.

If you’re not a fan of festivals then you probably wouldn’t want to visit the city of Medellin around July-August time, because that’s when the famous Feria de las flores (festival of flowers) takes place across the city. Flowers. Flowers everyyyywhere. Tourists from across the globe will gather to see a range of attractions from flower exhibitions featuring colourful flower arrangements made on large wooden pallets, large flowery floats for the big annual parade, and concerts. It’s no wonder Medellin’s flower festival lives up to the city’s nickname of ‘city of eternal spring’. Yeah, it’s probably best to give Medellin’s biggest event of the year a miss. Too much Colombian pride for one person to take in.

Just when you thought Colombia didn’t have enough frustrating reasons to make you jealous, you’ve got the beach life to dive into. All that beach to explore along the Caribbean coast will only result in giving you square eyes and tan lines from wearing your sunglasses for too long. With temperatures ranging between 27-32°C in Cartagena alone (imagine the amount of bottles of sunscreen you’ll need!), there’s 19km worth of beach to explore across the coast and an abundance of fresh seafood on offer. Not big on coconut rice and freshly cooked fish? (we didn’t think so) then there are plenty of traditional dishes at local restaurants in and around the city of Cartagena.

There’s also what many consider an undiscovered gem when visiting Cartagena, and that’s the Rosario Islands. Getting to the islands which are 27 small islands off the coast of Cartagena involves a 45-60 minute boat ride and take you into a land of crystal blue waters and cocktails served in coconut shells. Colombia’s beaches certainly attract attention, as you have hotspots like San Andres and Palomino beach’s off the beaten track appeal, but we know getting all that soft white sand in your shoes is a bit of a hassle.

Colombia is full of these. For those travelling to Medellin you have access to visit the famous ‘Pueblito Paisa’ a replica of a traditional Antioquian town, which consist of pebbled streets, colonial style houses and even fountains in the middle of a typical town square. Similarly, the town of Salento located in the coffee region of the country is pretty much like all those colourful colonial towns that you’ll come across when travelling around Colombia. Lots of colour, plenty of traditional art and old backstreets that take you back in time when you’re very much living the latino life in the present day. Just another reason to get uploading to Instagram if that’s your thing.

There’s cheese. And lot’s of it. So if you’re aiming to keep a steady diet during your visit it might be a bit of a challenge because you’ll see it served with or in a majority of the food there. A traditional breakfast many keen travellers like to try is the iconic breakfast of a large cup of hot chocolate with cheese melted inside it, known as Queso con chocolate or Buñuelos which are round cheese fritters that are traditionally eaten with coffee or hot chocolate. Not sure you’d like to try that in the morning with a mountainous backdrop as your main view. Colombia is also known for its variety of tropical and exotic fruits and local fruit sellers (not hard to miss) which means you can opt for a cup of fresh mango or coconut whenever you’re out and about, but the amount of fresh cheese available will still outway the calorie count i’m afraid.

“Welcome to the jungle!” Nope…sorry. Not in Colombia. You’ll need to find it first on a scenic 4-5 trek to the Lost City in the Sierra Nevada. The mighty trek usually starts from Santa Marta and gives adventurous trekkers the opportunity to learn about the indigenous communities living there from when the Lost city was built in 800 AD. If the Inca trail was too epic and nature-filled for you then you probably shouldn’t trek the Colombian jungle to the Lost city. Nevermind those panoramic views and waterfalls of the jungle.

7. A whole lot of history

From the Spanish colonisation to being home to one of the world’s biggest drug cartels, Colombia is filled with a crazy amount of history. But the truth is, the the country has turned over a new leaf and is actually growing in tourism. With increased security since 2002, a changing government and far less violence than ever before, you’re more likely to come across helpful locals than be part of a drug related crime scene out of Narcos I’m afraid. If however, you fancy learning more about everything from the Indigenous history to coffee farming traditions, there are a variety of museums and national parks spread across the country to visit.  Highlights include heading to the Gold museum in Bogota to come face to face with the largest pre-Hispanic collection of gold and visiting The National Coffee Theme park located in the Quindio region (El Parque del cafe) to enjoy the rides but also learn about Colombia’s agriculture and coffee making history.

Football in Colombia is a huge deal. As soon as there’s a national game on, expect to see crowds of proud Colombians wearing their football shirts from the early hours of the day. So if you’re paying a visit to the country in between June-July 2018 for the World Cup you’re in for a treat…not so much if you’re not a big footie fan. Known to be big social events in their own right, Colombian football matches don’t just start and end with the game itself. Some of the bigger cities like Bogota will have bar events and socials taking place throughout on big game days.