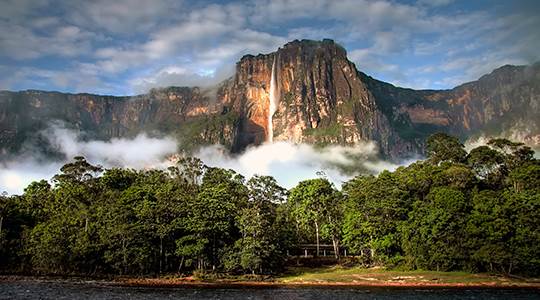 Films and books have inspired people to travel for years. Some of the greatest blockbusters and literary classics have been set in iconic destinations that have made people pick up their passports and journey to the corners of the world where their favourite forms of entertainment are made or set. Latin America has a whole host of destinations that have set the scene for some of the greatest fictional characters. Below we have listed some well-known classics, and the hidden gems that feature South and Central America in their scripts.

A Pixar and Disney hit, Up is a heart-warming tale focusing on an elderly widower as he sets out to fulfil his dreams, and complete his promise to his departed wife by travelling to the wilds of South America. Using hundreds of helium balloons, Carl’s house becomes his mode of transport, as he and a young scout name Russell land in the Tepui Mountains opposite the fictional Paradise Falls. Venezuela became the inspiration for the scenery behind this beloved film. Director Pete Docter and his team, travelled to the flat peaked tepuis of this country. They spent three days at Monte Roraima, the triple boarder point of Venezuela, Guyana and Brazil as well as exploring Matawi Tepui, located in Canaima National Park before climbing to Angel Falls.

One Hundred Years of Solitude

Often spoken about as a literary classic, One Hundred Years of Solitude is a 1967 fictional novel by Colombian author Gabriel García Márquez. The book, which has been translated into 37 languages and has sold more than 30 million copies, tells the story of the Colombian Buendía family as their founding patriarch founds the fictional town of Macondo. The lengthy novel follows the lives of seven generations of the family, whilst documenting important Latin American and Colombian historical events. It is an example of magical realism where a fictional story with fantasy elements blends with the “real world” and true historical occurrences.

The Motorcycle Diaries are the written memoirs of Ernestro Guevara, who is now known as the internationally famous Che Guevara. They document his expedition across South America along with his friend Alberto Granado. These adventures led him to become the Marxist leader he is famous for, and have been immortalised in the 2004 film of the same name. Travelling from Argentina, through Chile, Peru and Colombia and arriving in Venezuela, it is an 8 month journey that influenced his life as he witnesses social injustice as well the spirit of Latin America.

A mystery hidden deep in Guatemala rainforest, it is no wonder that the shrouded ancient Mayan ruins of Tikal have been featured in one of cinema’s most epic fantasy film productions- Star Wars. After seeing a poster of Tikal hanging at English travel agency, George Lucas was inspired and sent a film crew there to shoot the scenes, which later became the setting for the rebel base.

A light-hearted read that inspires travel in the best of us, The Travel Auction is about two strangers, each with their own personal problems who backpack around South America. Jonathon Cork and his girlfriend were meant to go together. They had booked the tickets and planned the trip- until she is found cheating. With a serious nut allergy, Jonny needs a travel partner – so he puts her non-refundable ticket up for sale on the internet. He needs to find a new Kate Thornly. What ensues, is a comedic, warm-hearted read about two people, having an adventure through the heart of South America whilst both facing their own struggles.

Another Disney family favourite and packed with laughs, The Emperor’s New Groove tells the story of the spoiled Emperor Kuzco as he rules over an Incan-like land. The production team travelled to Machu Picchu to study the artefacts that were to become the landscape of the film. Along with the architecture, the sun worship, the use of llamas and notably Kuzco’s name all are based from the Peruvian culture. His sidekick’s name, Pacha is said to be drawn from Pachacutec, one of the most important rulers from the Inca Empire. Nevertheless both the film and the publicity are not specific about the history or geography of the story and do not actually mention Peru in the script.

Butch Cassidy and the Sundance Kid

Notorious criminals, Butch Cassidy and his accomplice known as the Sundance Kid were real life robbers that terrorised America and later South America in the 1890s. Fleeing to Bolivia they continued their crime near Tupiza, before being caught and allegedly killed by the Bolivian authorities. They lives were marked in the 1969 Wild West film, which put Bolivia on the map for adventurous film-buffs wanting to follow in the trail of these historical villains.