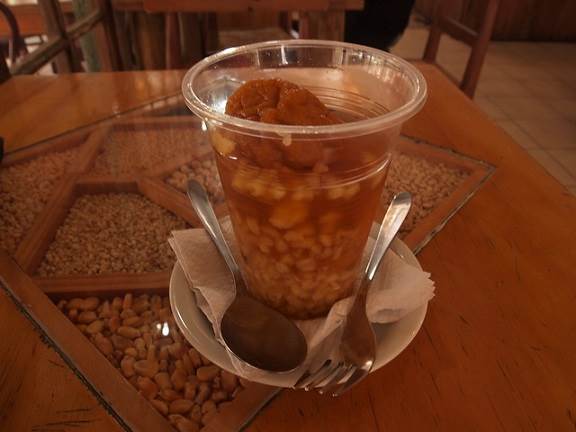 For the uninitiated, Chilean cuisine may come as a shock. Expecting spicy or intensely seasoned food, foreigners may find Chilean food bland by comparison. However, this doesn’t mean that there isn’t plenty of delicious food to be had in Chile, and one of the best places to get to know the country’s culinary landscape is on the streets. Street vendors can be found all around Santiago selling a variety of uniquely Chilean foods. So in no particular order, here is a brief introduction to some of the best foods (and drinks) you can find on the streets of Santiago.

Empanadas can be found in lots of countries in Central and South America, and Chile is no exception. The classic Chilean version of the filled pastry is an empanada de pino, which is filled with ground beef, onions, hard boiled egg, and, usually, an olive. It may sound like an odd combination, but well-made empanadas de pino are delicious and filling. You can find empanadas baked or fried with a variety of fillings (cheese-filled empanadas are also very common). A hot empanada when you’re tired and hungry from a day of exploring or working can make your day a whole lot better.

A completo is Chilean for a hot dog with toppings. The most common is called a completo italiano. In contrast to the ketchup, mustard, and relish U.S. classic, a completo italiano is topped with lots of mayonnaise, tomatoes, and avocado. Again, these ingredients may not seem like a natural combination, but it works beautifully. A completo italiano is a great snack, and will convince you that the time-honored Chilean tradition of putting avocado on almost everything deserves to catch on all over the world.

Sopaipillas are the Chilean answer to fried dough, a distant relative of the American funnel cake, French beignet, and Indian jalebi. Although sopaipillas can be found in other Latin American countries, the Chilean variation has squash as a main ingredient. They are slightly savory by themselves, and are usually topped with a sweet chancaca sauce made of made of unrefined sugar and honey with cinnamon and orange peel; or with mustard, cheese, or pebre, a salsa made of onions, garlic, vinegar, oil, peppers, and cilantro. Their versatility and fried deliciousness makes sopaipillas a must-try street food.

Cuchuflíes are cookies made out of thin dough, which is rolled up in a tube and filled with manjar (think dulce de leche), a sweet, caramel-like sauce about the texture of peanut butter which is ubiquitous in Chile. Cuchuflíes are usually sold in packages of three to five, and are light enough to satisfy your sweet tooth without being too filling. If you want to taste manjar without buying a half-kilo package in a grocery store, cuchuflíes are the answer you’ve been looking for.

Fruit juice is not exactly an uncommon sight in many countries, but in Chile it has become a staple of the street-food marketplace. Made of honeydew, pineapple, strawberry, peach, and any other fruit you can think of, you can find an incredible variety of flavors that you may not even have considered drinking in juice form. Just as refreshing as lemonade and less sugary-tasting than soda, they are the perfect refreshment for walking around the city in the hot, dry Santiago summer.

There is an expression in Chile that something or someone is “more Chilean than mote con huesillos”, which might give you an idea of where this drink fits into the Chilean identity. The mote is husked wheat cooked in water, and the huesillos are re-hydrated dried peaches cooked in a sugar and water mixture. When the mote is added to the huesillos and the liquid they were cooked in, the result is a deliciously refreshing summer drink that is uniquely Chilean.

Everything on this list can be found all around the city, but many agree that the area between Metro Patronato and La Vega (Santiago’s large, open-air food market) is the place to go to find the best food vendors. Finding good, cheap food on the street is an easy task in Santiago, and this list only barely covers the huge variety of foods and drinks you can find.