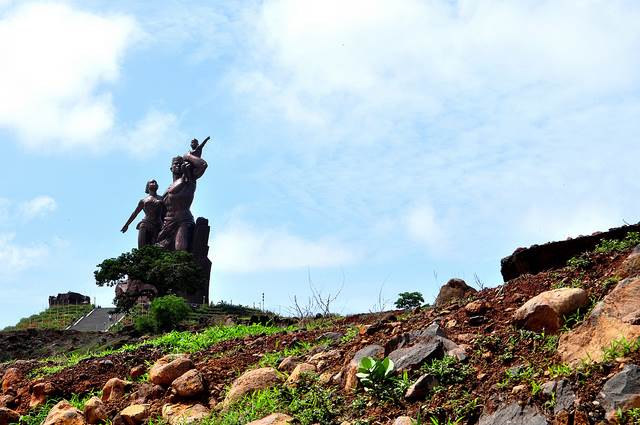 The city of Dakar, Senegal is often called the “Paris of West Africa.” But don’t let the (nick)name fool you – I’ve been to Paris and I live in Dakar, and Dakar is no Paris. This crazy, fun, loud, dirty burg perched on the Atlantic Ocean has plenty of excitement and surprises for travelers – but the City of Lights it ain’t. Here are five unexpected things about Dakar that make it a destination all unto its own.

1. The absolute giganticness of the African Renaissance Monument

The stats help tell the tale of its size – 160 feet tall, bigger than the Statue of Liberty, the tallest monument in Africa – but they still don’t compare with seeing the monstrosity in person. The statue is perched on top of steps on top of a hill, and in a city with virtually no other tall structures, it stands out, to say the least. Climb to the top to get some fantastic breezes. 2. Driving is some of the world’s worst in Dakar

You’ve been white-knuckled in a taxi in Boston, you’ve battled the streets of New York – but the driving in those metropolises is nothing compared to the danger-filled roads of Dakar. Cars swoop through roundabouts without so much as a sideways glance at oncoming vehicles, taxis honk incessantly to sell their services, exhaust-spewing car rapide buses enter and exit traffic at will. Traveler beware, lest you end up on the wrong side of a balingd Senegalese tire.

Travel to a third-world country often equates with mega-affordable prices. Not so in Dakar, where restaurant prices are comparable with Europe and the United States and grocery prices can be especially high. Take a head of broccoli, for instance, which will run around $12 USD at most chain grocery stores.

4. Animals roam the streets in Dakar

By African standards, Dakar is a modern, upscale place. But that doesn’t mean all is glittery and westernized, and one of the most glaring (and entertaining) examples is the street animals. Groups of goats are shepherded from one lot to another, even in the most affluent of neighborhoods, and it’s not uncommon to see a skinny steer tied to a building or a horse-drawn cart cruising the streets alongside an expensive sports car.

5. Fitness is king in Dakar, Senegal

“Athletic” is perhaps the top adjective used to describe most Senegalese men. They’re tall, lean and muscular – and they work for it. Running is huge in Dakar, with big groups of guys taking to the roads in the evening after some of the day’s high humidity has dissipated. They often jog in tattered shoes and without any special, moisture-wicking clothing – an inspiration for us spoiled expat runners and a great reminder that the best reason to run is simply for the love of the sport.