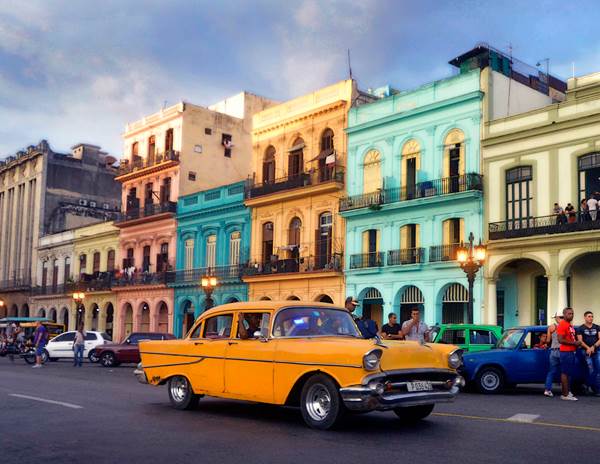 Cuba seems to be one of the few places in the world where time has stood still due to the long-lasting communist government. The country has resisted modernisations many of its “neighbours” in Central America have adopted. It’s the reason why more and more people want to travel to Cuba.

The capital Havana is the highlight for a lot of travellers visiting Cuba and rightly so, you will not find yourself bored in  this vibrant and colourful city. Here are a few things we think you shouldn’t miss out on in Havana.

It’s no secret that Havana is on the map for its boasting art scene. When you visit Cuba you will find beautiful architecture, but Havana has a lot more in store when it comes to art. Whether you like the cutting-edge street art the Callejon de Hamel has to offer, you enjoy having a coffee in one of the many art cafes or you feel like taking advantage of the gallery scene, Havana has it all.

If you’re in the mood for something a little more adventurous why not visit the Fábrica de Arte Cubano (FAC). The former cooking oil plant is a lot more than just an art gallery. You will find yourself surrounded by exhibitions, shops, live music and even food & drinks. Be prepared to join the crowd, there is often a queue to get into the fábrica.

If you’re ever stuck for things to do in Havana then look no further. Walk down the streets of old Havana and let the musical waves hit your ears. Or if you fancy something cosier, head to one of the many bars lining the colourful streets. The music scene in Havana is eclectic and no matter what genre you’re into, from Jazz to Rock’n’Roll, you can take your pick.

Just like most cities in Latin America you will find many gorgeous plazas spread across the city. The Plaza de Armas is the founding, and naturally the oldest plaza of Havana. In colonial times the plaza was used for social events such as concerts and parades. With all this history, beauty and daily secondhand book markets, it’s definitely worth a visit.

The Plaza de la Revolución, originally “Plaza Civica”, was built in the 1920s by the French urbanist Jean Claude Forestier and was given its current name by Fidel Castro after the Cuban revolution in the late 1950s.

These days the plaza is best known for its striking mural of Che Guevara who has played an important role in the Cuban revolution. The plaza is the base of the Cuban government and remains the political hub of Havana as it hosts many protests. It may not be Havana’s prettiest plaza but it’s definitely a landmark which has fed into Cuba historically and politically.

The Plaza de la Catedral is the home of the stunning baroque Catedral de San Cristobal and one of the most visited attractions in Havana. Appreciate the beauty of this buzzing plaza whilst getting a real feel for the city. You can find cafes and restaurants, street music, art, and locals in traditional costumes all around the plaza.

Still stuck on what to do in Cuba? You have probably seen a mountain of pictures of Cuba featuring classic cars. Driving an old car from the 1950s is at the top of the list of things to do in Cuba for many travellers and we can’t deny, driving a classic car through Havana is definitely an experience you won’t forget!

Situated in the heart of Havana you can stumble upon what might seem an unlikely find: El Bosque de la Habana (translates as “Forest of Havana”). If you’ve had enough of the city, feel claustrophobic or just want to breathe in some fresh air then make your way to Havana’s very own forest for some quiet, down time.

Did el Bosque de la Habana give you a taste for walking? El Malecón is Havana’s boulevard which stretches along the ocean side of the city for 8 km. Don’t worry if you’re not into walking, you can also do a smaller stretch of el Malecón or stop for a refreshing drink in one of the many buzzing bars along the way.

Visiting the Havana Rum Museum is one of the top things to do in Havana. You can choose from guided tours, tastings and cocktail workshops. Make sure you plan ahead and reserve your spot- group sizes are limited and tours are often fully booked! If you aren’t feeling too tipsy after then why not go to one of the many bars and try some rum-based cocktails? Our drink of choice would be a Cuba Libre or Mojito!

Cuba is world famous for its rum, salsa, music… and cigars! It has one of the world’s best tobacco-growing locations and still uses traditional farming methods. This is what has  made their cigars world famous and has significantly contributed to their economy for years. Visit the Partagas Cigar Factory for a guided tour and watch in awe how the renowned cigars are made.

Tempted to buy some cigars? There’s no doubt you will come across people on the streets of Havana who will try to sell you some cigars of questionable quality. The Cuban government has made it illegal for street vendors to sell cigars so make sure you head to dedicated cigar shops for the real experience.

11 See the sunset in Havana

You cannot travel to Cuba without at least appreciating one of the country’s dazzling sunsets. Before you head out to catch some live music or learn some salsa make sure you make your way to the ocean side or The Fosca (highest building in Havana). We promise that you will be mesmerised watching the sun disappear behind the beautiful buildings of Havana.