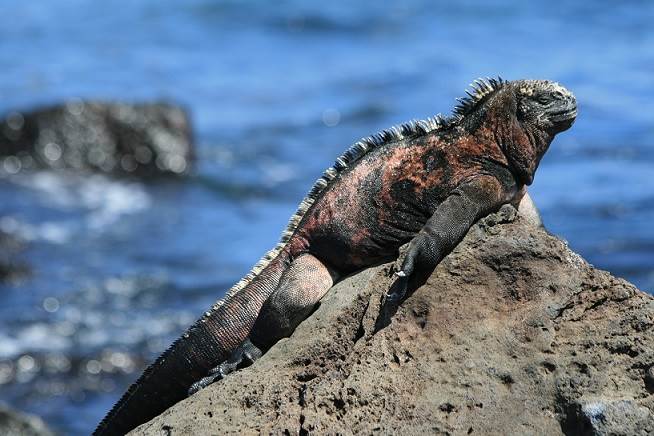 A cruise to the famed Galapagos Islands is a once in a lifetime opportunity and a mecca for wildlife buffs. The archipelagos consists of 20 islands with only 4 being inhabited. Going on a Galapagos tour is like walking into a David Attenborough documentary! And the animals here are not your ordinary type – they are very unique, many you can only find in this part of the world. A Galapagos tour is a great chance to get up close and personal with rare animals – they are completely fearless and won’t even look twice when you approach to grab that money shot!

There are more than 400 species of fish and an abundance of mammals found solely on the Galapagos Islands. So of course the number one reason for visiting these little dots of paradise is to see the animals. The unique species found here are perfect examples of nature’s bizarre solutions to evolution. It was visiting the Galapagos that inspired Charles Darwin to create the Theory of Evolution! Take a look at our pick of the weird and wonderful Galapagos Islands animals that have perfectly adapted to island life.

These scale clad reptiles are endemic to the Galapagos Islands. They aren’t very agile on land but are great swimmers and the only lizard in the world who can forage at sea! There are 6 subspecies of Marine Iguanas, each one living on a different island. Normally a dark black colour but in mating season that all changes. The iguanas turn red and black on Santa Cruz, pinky-red and dull green on Fernandina, and on Española and Floreana they turn a brilliant bright green and red!

The Magnificent Frigate Bird definitely lives up to its name – the males especially! Their black feathers have an iridescent purple tint when sparkling in the sun. In the mating season, their red throat pouches puff up to an incredible size, attempting to attract a mate. Other birds need to guard their supplies around them as they have a tendency to steal! They’ve been caught snatching food from others mouths and even eating their newly born chicks!

Meet the best dressed bird in the Galapagos! These penguins are the only one of their species to live in a tropical climate, north of the equator. Compared to other penguin subspecies, these are pretty unique. They stand proud at just below a meter and have temperaments a lot more gentle and docile than the others. Can be found diving all over, but prefer Fernandina and Isabela.

A marine bird which only lands to breed but is regularly seen on the Galapagos Islands. As the name suggests, these distinctive birds have bright blue feet! With brown wings and a white body and head, the contrast is striking. If you visit the Galapagos Islands during mating season, you might get to see their spectacular dancing skills. They alternately lift each blue foot and strut around the female, trying hard to grab her attention.

This bird has black and brown feathers, piercing blue eyes, a deep growling voice and wings that are too small to fly. Needless to say, the Flightless Cormorant is quite an odd bird! There are only 1000 left on the Galapagos Islands and are now one of the rarest birds in the world. Remarkably, they are the only Cormorant in the world to lose its ability to fly. Having no predators in the Galapagos means they have no reason to fly away!

Related to other Batfish species but endemic to the Galapagos Islands, this funky looking fish is very unique. With the red-lipped pout of a Hollywood star, it is speculated that these lips have evolved to lure in mates under the sea. The Galapagos Batfish is actually not much of a swimmer! They crawl along the bottom of the ocean on pectoral and pelvic fins, searching for prey.

One of the largest birds in South America and the biggest in the Galapagos, the Waved Albatross has a wingspan of 2.5 meters! Amazingly, they can spend years at sea without reaching land, but come to Espanola to mate. A very loyal bird, they mate for life. Each year when they find their way back to each other, they repeat the elaborate dance performed the first time they courted – which can sometimes last for hours!

These pretty little sea lions are only found on the Galapagos. Like a lot of Galapagos animals, they have an abundance of food and no predators, so they have no fear or reason to flee. Being so playful and inquisitive, these cute animals are often compared to pet dogs! They are often found lazing in the sun on the the white sandy beaches, earning top-spot for the most photogenic animal found on the Galapagos Islands!

Sadly, one of the only animals in the Galapagos Islands to be fearful of people. Horribly, they are widely hunted, nearing extinction. They are the smallest of all small-eared seals, with the females only reaching 1.2 meters. Apart from a few small differences, they are very similar to the Galapagos Sea Lion – most notably their thick fur coat. You can spot the fur seal on most Galapagos Islands sunbathing on the rocky shores.