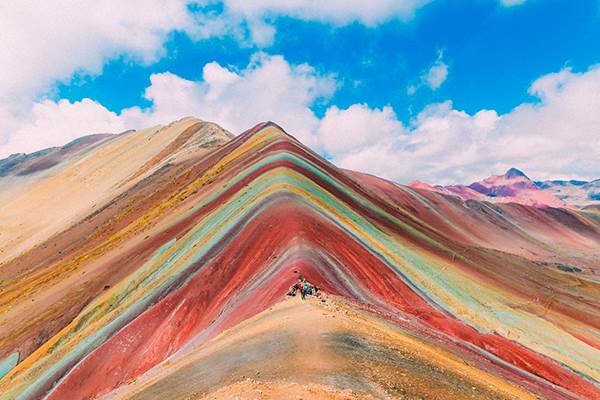 Machu Picchu is the masterpiece of Peru’s beautiful landscapes – with it’s mystical atmosphere, captivating Inca history and ancient ruins. The remote attraction is undoubtedly a highlight of a trip to Peru, but did you know that the South American country has an array of fantastic sites, ranging from natural beauty to historical treasures? Keep reading for our top ten best places to visit in Peru that aren’t Machu Picchu.

Colourful birds, lurking reptiles and an abundance of misty rainforest – the Amazon Jungle is one of the most biodiverse places on earth. The Amazon Rainforest covers an incredible nine countries – Brazil, Peru, Bolivia, Colombia, Venezuela, Guyana, Suriname, French Guyana and Ecuador. Over 50% of the rainforest lies within Brazil and only 12% covers Peru. However, the Peruvian amazon is easier to access and cheaper than its neighbour. For the ultimate Amazonian experience, spend a few days in the depths of the rainforest at an eco lodge where local guides will offer a variety of excursions including bird watching, canoe rides, piranha fishing, jungle walks and more. It can’t be argued this is one of the best places to visit in Peru.

Colca Canyon is an impressive gorge located in southern Peru. At 3,270 metres, it’s one of the deepest in the world and one of the biggest attractions in the country. In fact it’s twice as deep as the famous Grand Canyon! The viewing platform has fantastic views of the canyon and surrounding landscape. Visitors should keep an eye out for the famous Andean condor, the largest flying bird on the planet. It’s common to see them soar above the canyon! Colca Canyon is possible to visit on a day trip from Arequipa, and the scenic drive is rewarding in its own way – picture Andean wildlife roaming below rolling hills and mountain landscapes.

Another one of the best places to visit in Peru is Lake Titicaca. Occupying parts of both Peru and Bolivia, Lake Titicaca is the largest lake in South America. At 3,800 meters above sea level, it’s also the highest navigable body of water in the world. The lake is home to over 500 aquatic species and a variety of bird life including the Andead coot. The beautifully constructed islands are often the first image you’ll see when researching Lake Titicaca. Golden hued reeds floating on the bright blue water, and sights of locals wearing brightly coloured traditional clothing.

Myths and ancient beliefs are prevalent here. The Inca’s believed that Lake Titicaca was the birthplace of the sun. Inca legend also tells the story of how God Viracocha appeared from the lake and created the first Inca civilisation. Ancient temples and ruins have also been found at the bottom of the lake. This has created questions on the civilisations that existed here throughout history.

Situated off the coast of Peru near the town of Paracas is a collection of rocky and rugged islets overflowing with nature. The Ballestas Islands are teeming with over 150 species of bird life including penguins and pelicans. You’ll also find an abundance of sea lions frolicking on the rocks. In order to protect the animals that call it home, it’s not possible to set foot on the island. The best way to experience everything is on a boat trip that takes you as close as possible to view the animals that live here. You might even spot some dolphins dipping in and out of the water next to your boat!

The Ballestas Islands are a part of the Paracas National Reserve, protecting the fantastic natural landscape that exists here. On a boat trip off the coast you’ll also witness the Candelabro. This is a mystical geoglyph that’s thought to be connected to the Nazca lines. An experience to remember and one of the top places to visit in Peru.

Nestled in southern Peru is a city shimmering in white volcanic stone and overlooked by the snow-capped Misti Volcano. You’ll realise why Arequipa is also known as The White City as the sun bounces off the bright exteriors of the architecture. The beauty of Arequipa captivates those who visit; streets adorned with ornate buildings, traditional restaurants and an impressive main square, oozing that classic South American flare. Exotic palm trees and restaurants line the beautiful plaza. It also has some of the city’s most iconic buildings – including the Arequipa Cathedral and the Iglesia de la Compañía. Visit the Santa Catalina Convent, with its maze of cobbled alleys and historical buildings. Exploring the peaceful gardens and religious architecture gives you a feel for how the former nuns in this monastery once lived.

The Museo Santuarios Andinos is home to Juanita, the “Inca Ice Maiden. For those interested in Inca civilisations it’s a must see in the region. It’s thought that she was sacrificed around the year AD 1450 on top of the Nevado Ampato. She was found in the 90’s when volcanic ash melted the snow that surrounded her body.

Huacachina is an extraordinary desert oasis located a short distance from the city of Ica. Surrounded by rolling sand dunes, the small lake was believed to have ancient healing powers. This made this small haven popular with wealthy Peruvians in the 60s. Since then, it has grown to be a popular attraction with a great variety of accommodation and restaurants dotted around the water. Many visitors also enjoy the most popular activity in the area – taking in the view from the top of the sand dunes before sand boarding to the bottom!

The mystical Nazca lines of Peru have long left historians and archeologists baffled about their presence. The mysterious parallel lines and geometric figures are etched into the rich soil on the desert floor. They are best seen from the air on a short scenic flight, although there is also a viewing tower. The gigantic shapes include a monkey, hummingbird, spider and what is considered a spaceman. Three separate groups are thought to have created them. These are the Paracas (900 -200 BC), the Nazca (200BC -600AD) and then new migrants from Ayacucho around 630AD.

1553 was the first mention of the mystical figures. At this point, they where thought to be trail markers. Over time, countless historians and archaeologists have attempted to determine the purpose of the lines and now believe they are simply linked to the Inca beliefs. The idea they were created to determine the position of the sun and other celestial bodies is a popular proposal. Others argue they were formed so they could be seen by the gods. If you like a little mystery, this is one of the best places to visit in Peru.

Nestled in the north of Peru is an ancient citadel that is thought to be older than Machu Picchu itself. The various crumbling structures, which sit at 3000 meters above sea level, have breathtaking views over the lush Andean scenery. It’s often shrouded in a humid mist that creates the mystical atmosphere commonly found amongst the Andean mountains. Nature has reclaimed many of the structures.. However the main building, a large circular structure reaching 20 metres high, gives a fantastic glimpse of what once was.

The settlement was built by the Chachapoya, also known as the “Warriors of the Clouds”, due to living high in the Andes. Walk amongst the ancient structures, of which there are over 500, and you will see stones with intricate carvings and unusual shapes. The UNESCO nominated site has previously only been accessible by a long drive and three hour hike. Today, the process of reaching Kuelap is much more manageable after a cable car was constructed in 2017. We can only imagine this will cause a rise in tourism over the coming years, so best to visit sooner rather than later.

The beautiful scenes found in the Cordillera Blanca mountain range are not so different to the depths of Patagonia. Picture soaring mountains and glistening blue lakes deep in the Andes mountain range. The Cordillera Blanca extend 200 kilometres and provide parts of northern Peru with water year-round. Many of its peaks reach over 6,000 meters with the highest called “Huascaran” standing at 6,768 meter above sea level.

To reach one of Peru’s best kept secrets, you’ll want to stay in the small town of Huaraz. If you are travelling overland, you’re looking at around an eight hour bus journey from Lima. Huaraz itself is a charming and rustic town serving tourists looking to experience the mountains. You can expect small boutique lodges and hotels and plenty of local restaurants to choose from. There are various hikes depending on your fitness level. The three main ones that are popular with tourists: the four day Santa Cruz hike, the approximately three hour Laguna 69 trek and the eight day Huayhuash trek. If you love hiking, this is one of the best places to visit in Peru.

Rainbow Mountain has become one of the most insta-worthy locations in Peru. It’s colour scheme tends to resemble hues of dusty reds, oranges and yellows due to mineral deposits. When layers of thick snow melted away, the attraction came to light. This was only in 2015! It’s a three and a half hour drive from Cusco followed by a one hour hike to the viewpoint. Don’t be deceived though, that one hour is uphill and at altitude so still requires a decent level of fitness. We recommend arriving early so that you can beat the crowds too!