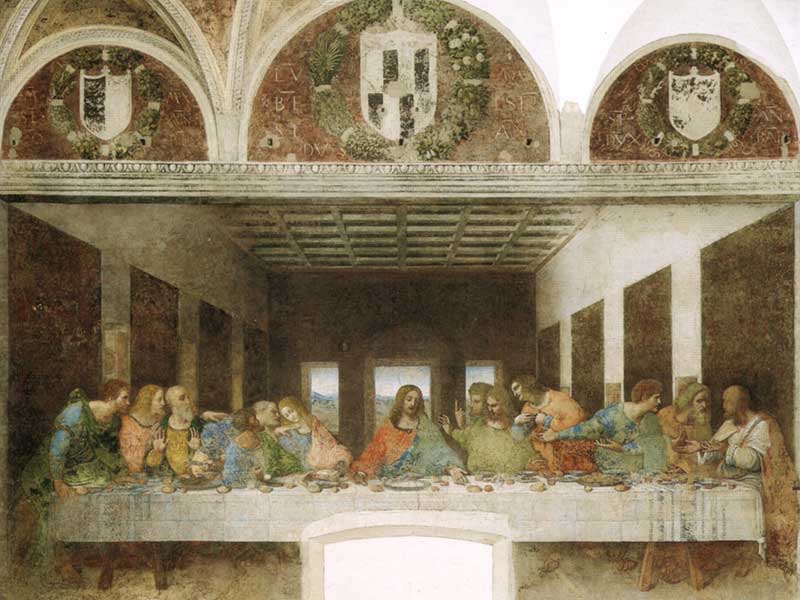 In May, the world will honour the death of one of the most influential people in history, Leonardo da Vinci. It’s not exaggerating to say that almost every person in the world knows his name. Not only was he a genius with a paintbrush, he was also a skilled inventor, scientist, mathematician, musician and writer, to name a few. The term ‘Jack of all trades, master of none’ doesn’t even slightly apply here, he was a master of all.

500 years have passed since his death, and since then, his artwork has gained even more honour year on year. Coming from a small village in Tuscany, his artwork has now spread all over the world. If you’re at all interested in history, art, or even just happen to be travelling to these parts of the globe, stop off and learn what a masterpiece really looks like.

One of the most famous paintings in the world ‘The Last Supper’ is housed in the glorious Santa Maria Delle Grazie in Milan. Honestly, if you don’t even like art, you would still be in awe of its beauty. The fame of ‘The Last Supper’ only grew more after Dan Brown published ‘The Da Vinci Code’ which claimed the painting disguises an array of secrets, hidden between the brush strokes…

If you’re lucky to experience the cultural charm of Poland, a trip to the National Museum is a must. As well as many other famous works of art, Leonardo da Vinci’s portrait ‘Lady with an Ermine’ is one of the major draws to this museum. It is believed that this is a portrait of Cecilia Gallerani, the mistress of the Duke of Milan – Lodovico Sforza. The National Museum is just a stone’s throw away from Old Town. An atmospheric district dripping in historical culture.

Impressive does not begin to describe the Louvre. Holding over 35,000 pieces, it is the largest museum in the world. And nestled in its antique lined walls, are 3 of Leonardo da Vinci’s paintings. ‘St John the Baptist’, the ‘Portrait of Isabella d’Este’ and one of the most famous paintings in the world – the ‘Mona Lisa’. This masterpiece is so precious that it has its own bodyguards stationed either side of the canvas. The Louvre is a stunning building in itself and one of the most popular attractions in all of Paris.

The Uffizi Gallery is always listed as one of the top attractions in Florence. Located in the historic centre, it houses one of the most exciting collections of Leonardo da Vinci’s work. 13 of his paintings are displayed in the relatively new ‘Leonardo da Vinci’ room. All of which were created before he turned 30 and fled Italy in favour of France. If you feel like you’ve only just scratched the surface of this famous genius, there’s also the nearby Leonardo da Vinci museum which takes a look at a different side of him – his bizarre but incredible inventions!

In a city renowned as being a bit harsh on the wallet, it’s great when you find something for free! And in this case, it’s the National Gallery. ‘The Virgin of the Rocks’ is actually one of two almost identical paintings. One hangs here, the other remains in the Louvre. The National Gallery also houses another famous piece by Da Vinci – ‘The Burlington House Cartoon’, drawn on eight sheets of paper and glued together, drawn in charcoal and chalk. The National Gallery sits on the famous Trafalgar Square amid giant lion sculptures and flowing fountains. It has a pretty good cafe too!

Isn’t it ironic that the smallest state on the globe, holds some of the biggest treasures? Besides being one of the holiest places in the world and the official residence of the Pope, Vatican City is home to some of the most precious pieces of art in the world. One of which is the famous, albeit unfinished painting of ‘St Jerome in the Wilderness’ by Leonardo. Vatican City is a marvel in itself from the grandeur of St Peter’s Basilica to the otherworldly Sistine Chapel, and definitely not a place to miss if you happen upon Rome.

An unassuming gallery in the heart of Venice holds one of the most studied drawings of our time – the ‘Vitruvian Man’. As with everything in ‘The Floating City’, you will likely just stumble upon the gallery while weaving your way through the labyrinth of side streets. Leonardo da Vinci believed that the workings of the human body are synonymous to the operations of the universe. The ‘Vitruvian Man’ was drawn to show the proportional relationship between the two.

The Hermitage Museum in Saint Petersburg is a must-see of Russia. The grandeur, the opulence and the sheer class of this place is beyond words. With its iconic horses and carts stationed outside, it’s a real picture of decadence. But inside its walls lie the treasures. Leonardo da Vinci’s ‘Benois Madonna’ is one of the most copied pieces of art in the world. Artist after artist have attempted to replicate the beauty of this painting and none have come close. The Hermitage Museum also owns ‘Madonna Litta’ – a depiction of the Virgin Mary breastfeeding baby Jesus.’

The Hermitage Museum in Saint Petersburg is a must-see of Russia. The grandeur, the opulence and the sheer class of this place is beyond words. With its iconic horses and carts stationed outside, it’s a true picture of decadence. But inside its walls lie the treasures. Leonardo da Vinci’s ‘Benois Madonna’ is one of the most copied pieces of art in the world. Artist after artist have attempted to replicate the beauty of this painting and none have come close. The Hermitage Museum also owns ‘Madonna Litta’ – a depiction of the Virgin Mary breastfeeding baby Jesus.’

One of Milan’s best libraries holds the ‘Portrait of a Musician’ by Leonardo di Vinci. Inside this unassuming building lies frescoed adorned staircases, lines of statues guiding the way and rows of books like you’ve never seen before. The Biblioteca Ambrosiana is a treasure chest of artefacts. From ancient love letters to manuscripts from Greece and Syria to the oldest copy of the Kitab Sibawahaihi. And if you’re a bit of a bookworm, the library room at the back is simply, heaven!