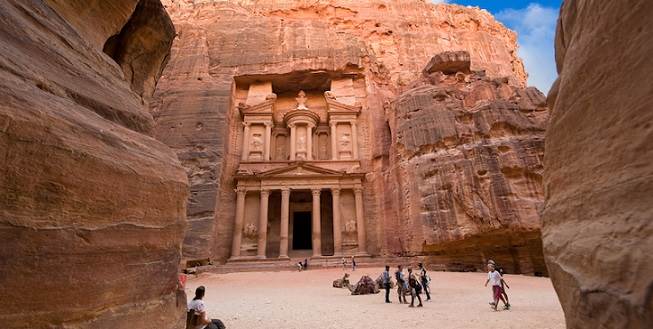 If you’re planning to take a trip in April but you have no clue where to go you’ve come to the right place. Whether you’re looking for some inspiration, you’re after the best beach or you want to see as much wildlife as possible, you’ll find it all in our travel calendar.

It’s hard for an adventurer not to be tempted by Jordan. Go for a float in the lowest body of water on earth, wander the streets of the busy capital Amman, feel like an explorer in Petra and sleep under the stars in Wadi Rum. April is a good time to visit Jordan before the midday sun of the following months gets too hot whilst avoiding the bitter cold winter nights from January through to March. Plus the Dead Sea tends to have a pleasantly float-able temperature of 29 degrees Celsius in April.

If you’re eyeing Sri Lanka it’s important to remember that although fairly small in size, the northeastern and southwestern sides of this island have different seasons. April marks a slow end of the dry season on the southwest coast whilst it’s the beginning of the dry season on the northeastern part of the island. So if you’re after a round trip of the idyllic island you’re most likely to catch warm and sunny days across Sri Lanka in April.

Are you as fascinated as us by pictures of the roaring Victoria Falls? Then you’re in luck because April is one of the best times to see the falls when they’re at their peak. The heavy rainfalls of the previous months are responsible for the full and powerful falls that will not disappoint. However, do bear in mind that some activities, like the Devil’s Pool, are not open when the waters are this strong.

Seasons in China are extreme, making Summer too hot and winter too cold to explore the country. April is the sweet spot with pleasant temperatures to get to know hectic but fascinating mega cities like Shanghai and Beijing, as well as it’s not too hot yet to explore the Wall of China. And you’ll catch a glimpse or two of the beautiful cherry blossoms in April.

Thailand (similar to Sri Lanka) is a country that experiences different seasons on the east and west coast. April is the best time to visit for hot temperatures and clear skies, exactly what you want when exploring the picturesque shores in Phuket and Khao Sok National Park.

The dry season in Nepal runs from November through to April but days and especially nights are very cold during this time. If you’d like to wander the streets of historical Kathmandu, go on a game drive in Chitwan National Park and hike the panoramic Annapurna Foothills in pleasant temperatures with relatively little rain and lower humidity then April is one of the best times to visit this small country before Nepal embraces the heat and rain.

The Galapagos Islands are truly an all-year round destination and you may have heard the annoying phrase “the best time to go depends on what wildlife you want to see”. Whilst this is a true statement, April might offer a great alternative for travellers who haven’t got their heart set on seeing specific wildlife. April brings warmer weather and waters along with a calmer sea and lush vegetation.

It’s not a secret that Japan is a world famous destination in April when the beautiful cherry blossoms conquer the country. While it can be a little chilly at times with day temperatures typically around 20 degrees Celsius, the pink blossoms will make exploring in a hoodie worth your while.

You can expect dry weather and hot temperatures in Mexico in April. It’s the ideal month if you’d like to experience everything Mexico has in store, from ancient temples to stunning beaches.

Similar to Jordan, April is the perfect time to visit Egypt. The sun isn’t glaring on your head at noon and the nights are starting to warm up. Exploring ancient sites and famous pyramids to cruising the Nile on a felucca, Egypt won’t fail to amaze every type of traveller.