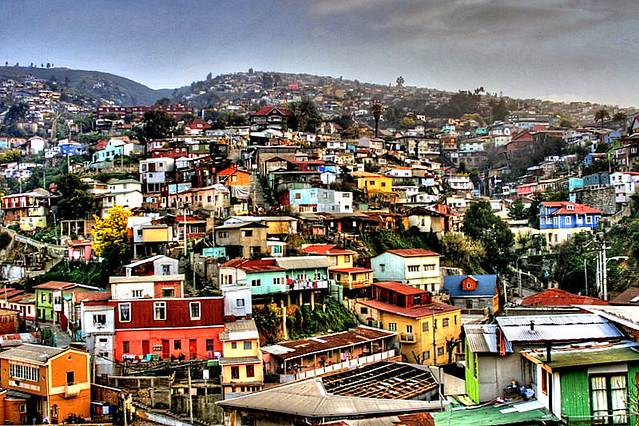 The port city of Valparaiso is one of the oldest cities in Chile and one of a kind. Colorful houses fall from the innumerable hills that surround the bay, forming sinuous streets that climb and descend over the hills in disorder, a labyrinth of unique and unrepeatable corners. Combining the bohemian, elegant and precarious, this is a must-see for anyone wishing to visit and explore one of the most emblematic and interesting places in Chile.Valparaiso is a big city and there are many ways to explore it. We present here one of the most authentic journeys of Valparaiso, twisting between the hills on the 612 bus, better known as the “O” bus, in which path it is said that the best of the city can be seen.

The 612 bus line, which travels between the Limonares sector in Viña del Mar and the Playa Ancha sector in Valparaiso, is informally known as the “O” bus line due to this being its former name. The once green-colored buses characteristic of the city are now a mix of red and pale yellow. Traveling around city on these buses is an attractive alternative both because of the trip itself and the cheap price of the ride. The bus ticket has a cost of CLP 340, paid directly to the bus driver. The 612 bus line passes close of Valparaiso and Viña del Mar bus terminals.Line 612 stands out for connecting the hills of Valparaiso, offering amazing views from the top of the city. Although the complete circuit goes from Limoneros in Viña del Mar to the graveyard N°3 in Valparaiso, here we cover the section that goes between Argentina Poniente avenue (close to Valparaiso bus terminal) and Bustamante street (close to Echaurren square).

After taking the bus in direction to Playa Ancha and advancing through Argentina Poniente and Colon avenues, the ascent to the hills start along Francia avenue, taking briefly Baquedano street before reaching Alemania avenue. The former is a twisting street that goes through the hills and different viewpoints and points of interest. The La Sebastiana house-museum stands out with its characteristic boat shape as one of the 3 houses that were owned by the Chilean poet and Literature Nobel prize Pablo Neruda. Viewpoints like Ciudad de Camogli and Bismarck Square can also be enjoyed along Alemania avenue. During the ride you will be able to enjoy the particular beauty of Valparaiso, with its thousands of colored houses, many of them hanging from cliffs and looking like falling down.

The route continues through a section of Camino Cintura street, as twisting and sinuous as the previous section, to then descend through San Francisco street. At this point you are already in the middle of the Port district. Points of interest here are the Echaurren square, the Heroes de Iquique monument, the 21 de Mayo walk and the Prat dock with its commercial and artisan stands, among others. Here you can enjoy a good plate of fried fish with smashed potatoes or french fries in one of the port’s many restaurants, which were most of them located in the Mercado building before the earthquake of 2010. Sadly the building was damaged and they had to relocate in the surrounding area, disappearing many of the food stands that could be found there.

The proposed route on the 612 bus can alternatively be done on foot, taking between 2 to 3 hrs. After walking and exploring the Port district, you can visit the Naval Museum and the 21 de Mayo walk, located very close to the Echaurren square, in which case you can use the Artilleria elevator, one of the famous and typical elevators of Valparaiso for a cost of CLP 300. The Sotomayor square is also close by, and there you can visit Valparaiso tourism office (located in the Consejo Nacional de la Cultura y las Artes building). In this office you can ask for information about Valparaiso and maps free of cost.

From Sotomayor square you can walk to the Yugoslavo, Gervasoni and Atkinson walk-viewpoints. If you want to return to the starting point of the circuit you can go back to Echaurren square and take the 612 bus, whose return route is practically the same. Alternatively, you can take the trolleybus (CLP 300), a journey full of charm with funny characters that take the trolleybus to tell the city’s history.

As visitors travel and explore the hills and neighborhoods of Valparaiso they can realize that it’s not only the houses that make this city a mix of colors. Innumerable paint murals adorn each corner, where artists have the freedom to use the whole color palette. This contributes to make each street and corner unique, giving the impression of discovering the city with each step. It is not for nothing that Valparaiso, “the jewel of the Pacific”, was declared World Heritage and is visited by thousands of people each year.

Valparaiso is more than its emblematic walks, elevators and sights, is a city that deserves to be lived. Do not miss a chance to enjoy local food like “empanadas” and “chorrillanas”. Empanadas are a fried or baked mass filled with meat, cheese or seafood, among other ingredients. The chorrillana was born in Valparaiso and consists of a big plate with french fries, slices of meat, chorizo, fried onions and eggs. It is a “grupal” meal due to its huge size in which is usually served, ideal to share with friends.In respect to nightlife in Valparaiso, a mandatory stop is the mythic El Huevo, one of the first pubs in the city and part of its intangible heritage. The four-stories building works as a bar, disco and event center. The city has as well a multitude of cafes, restaurants, bars and discos.Finally, we recommend to assist to a football match of the local team, Santiago Wanderers, in the newly refurbished Elías Figueroa Brander stadium. Here the “wanderinos” support their team each weekend they play at home. The identification of Santiago Wanderers with the city that saw it born earned it the official recognition as Intangible Heritage of the city the year 2007.