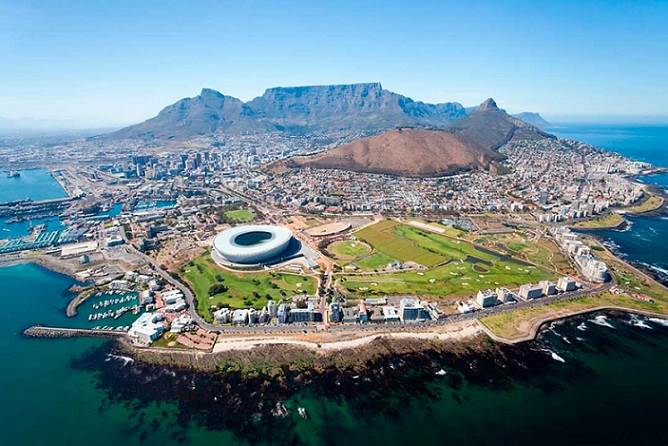 Getting to South Africa

South Africa is situated at the southernmost tip of Africa, the second largest continent in the world. It borders: Zimbabwe, Mozambique, Namibia, Botswana, Swaziland and Lesotho – which is an enclave. The country is also close to three oceans: the South Atlantic Ocean, the Southern Ocean and the Indian Ocean. Here’s a few estimates of flying times to South Africa.

South Africa has some of the most beautiful, natural landscapes in the world just waiting to be explored. The vast majority of the South African landscape is made of raised plateaus, covered in bushveld and highveld.

South Africa is also home to one of the largest canyons in the world – Blyde River Canyon – and several mountain ranges. The highest point in the country is the Mafadi peak (part of the Drakensberg Mountain Range) which reaches a height of 11,320 ft.

South Africa has famously been coined as ‘the rainbow region’ due to the multitude of cultures and religions that live within its borders. Many South Africans have remained in the rural villages they call home, allowing their cultures to survive over the years.

Each area tends to have one or two cultures predominant in that region. Some of the largest traditional South African cultures are; Khoikhoi & San, Zulus, Xhosa, Ndebele, Sotho and Venda. Whilst the strongest of these cultures have survived, the country is inevitably losing many of their traditions as urbanisation and new technologies spread through the area.

As for religion, the vast majority of the country are Christian (about 80%), around 1.5% of the population are of the Islamic faith, 1.2% practice Hinduism and 0.2% practice Judaism.

South Africa has a fascinating yet upsetting past, with special consideration to the Apartheid system. Due to this, many of South Africa’s ethnic groups have not integrated into the wider society even though they have been cohabiting for years.

South Africans can be some of the friendliest bunch of people you’ve ever met. The common greeting is with a handshake or a hug (depending on how well they know each other) engaging with small talk as a matter of politeness.

Same sex marriages are legal in South Africa and the country now has a large LGBT community. However, these are primarily focused around cities. Same sex and interrelatial affection may get more little attention when outside the cities.

Most people, unless you are really delving into the depths of the African tribes, will speak English. However, do not expect many people to know any other language apart from the above official ones.

Travelling to South Africa is relatively easy regarding visas. Most nationalities will not need to obtain a visa if the trip is under 90 days. You will only need to present a valid passport with 30 days after the intended departure date remaining, and a return flight ticket. Visitors from the UK, Canada, Australia and the USA do not need a visa, however visitors from anywhere else in the EU will need one. There are a few exceptions to this rule:

The above should be used as a starting point only. Always be sure to check the official government website for up to date information.

The CDC and the WHO advise for the following routine vaccinations to be up to date when visiting South Africa; Measles-mumps-rubella (MMR), diphtheria-tetanus-pertussis, varicella (chickenpox), polio and a standard yearly flu shot.

Is it safe to drink tap water in South Africa?

Yes. In fact, South Africa has the third best water in the world in terms of being safe and ready to drink.

We always advise travellers to save a few important telephone numbers for the country you are visiting in case of an emergency. The emergency numbers in South Africa are:

Travelling as a single woman in South Africa

These tips aren’t only for single women, but everyone travelling to South Africa. It is well-known that South Africa has a high-crime rate, which doesn’t mean you shouldn’t travel there, it just means you will need to do a little more preparation and have your extra-wits about you!

Most cases of violent crime happen in townships and central business districts in major cities, so if you are visiting these areas, employ a little more self-awareness and possibly hire a guide. Outside of these areas, tourists are much more safe. The South African authorities see tourist safety as a high priority and deploy tourism police in many large towns.

Travelling to South Africa with minors

South Africa has strict laws on travelling with minors (those under the age of 18) due to the risk of human trafficking. While the act has been relaxed slightly and documentation is not always requested if your surnames match that of your child, it is down to the individual immigration officer and you should always be prepared. Therefore if you are travelling to South Africa with a minor you must bring a full copy of the original birth certificate as proof of your relation to the child.

Wifi is commonly available all over South Africa, however can be a little slow and unreliable outside of the cities. Most hotels and guesthouses will provide free wifi, as do many restaurants and cafes.

When connecting to any wifi hotspot, keep an eye out for the AlwaysOn network. In most places they will offer 30 minutes of free wifi per hotspot (after you have signed up of course).

A few internet cafes can also be found in most towns. These charge around R40 per hour ($2.80).

South Africa (SAST or GMT+2) is one hour ahead of the UK, 8 hours behind Australia and 6 hours ahead of Canada. Daylight savings time is no longer in use in South Africa. To calculate the time difference from your current location visit timeanddate.com.

Getting around South Africa

The main bus service providing tourist transport is Baz Bus. These buses act as a shuttle for popular routes. You can purchase a one way ticket and hop off whenever you like. This is a great way to meet other backpackers. For local buses, the most widely used companies are Greyhound and Intercape. These are often more expensive than Baz Bus for short journeys but are much cheaper for longer trips.

Catching domestic flights around South Africa is generally a low-cost and easy way to travel. Popular budget airlines are Mango and Kulula. These airlines run flights regularly to all main airports and some smaller ones.

The minibus taxi is used by most of the South African population. These taxis service any journey from travelling around a small town to driving across the country. However, please use with caution. There has been a lot of reports of petty crime whilst using minibus taxis, there is rarely room for large luggage items and the vehicles level of safety can be dangerously low.

With all the stunning, interesting and tailored routes for road trips around South Africa, hiring a car is one of the most popular ways to travel. Car hire is particularly attractive due to providing you with the means to explore national parks and more remote areas yourself. As the crime rate in South Africa is particularly high, make sure you lock any valuables out of sight and purchase a decent level of insurance.

Trains are one of the least used modes of transport, especially with locals. This is purely due to the country now relying heavily on the highway. That said, you can often get pretty cheap train tickets between major cities. The major downfall for using the train is the speed. For example, a standard journey from Cape Town to Johannesburg will take around 30 hours, whereas a bus is around 20.

We advise to carry some cash as well as cards. Most places will accept debit / credit cards, however if you venture off the beaten track, small shops, markets and stalls will only accept cash. ATMs are easily located in all towns and cities, however if you are heading into a village, we advise to withdraw cash in a nearby town before you go.