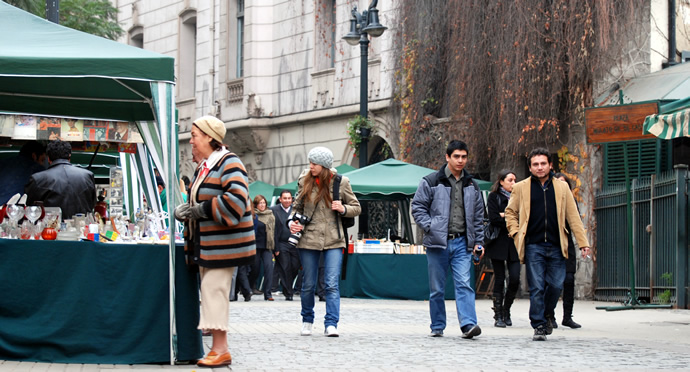 As a traveler, your best option to discover Santiago is to walk through it’s streets and immerse in a city that is constantly renewing its spaces.

You can visit Santiago’s civic neighborhood walking down Libertador Bernardo O’Higgins Avenue, also known as La Alameda. In the way, you can stop at Santa Lucía Hill, in front of which you can find a traditional Chilean crafts market. Further west in La Alameda, there is Palacio Presidencial La Moneda (Presidential Palace). Towards the north, there is the Catedral Metropolitana (Metropolitan Cathedral) and the Plaza de Armas.

To the south by La Alameda, you can find Santiago’s old residential neighborhood. It comprises the Almirante Latorre and Blanco Encalada avenues, and  the Club Hípico de Santiago, the main horse racetrack in the city. In this neighborhood you can appreciate the beauty of the houses that date back to the end of the 19th century and the beginnings of the 20th century, among which Palacio Cousiño stands out.

Other places of interest in downtown Santiago

Museo de Arte Precolombino: This museum has a large collection of material from the pre-Columbian cultures, such as the Aztecs, Mayans and Incas, as well as from Chile’s natives, such as the Diaguitas, Mapuches, Rapa Nuis and Selk’nam, among many others. The museum opened its doors to the public in December 1981 and it is housed in Santiago’s Real Audiencia Palace’s former building, in downtown Santiago, in the intersection of Compañía de Jesús and Bandera streets.

Museo Histórico Nacional: The museum is open since 1982 and it is housed in the Real Audiencia Palace as well, which is also known as “Independence Palace”. The building dates back to 1808 and is located in the north sidewalk of the Plaza de Armas. The museum shows the different stages of the Nation and State’s process of formation.

Santiago’s Cementerio General: Outdoor museum, it is the oldest and most emblematic cemetery in Chile. This is the place of rest for different aristocratic families and relevant people in the history and culture of Chile, (former presidents, diplomats, among other personalities).

Museo de Arte Contemporáneo-MAC: Located next to Bellas Artes metro station (Lastarria Neighborhood), the MAC depends on the Faculty of Arts of Universidad de Chile. It was founded in 1947 and in its six decades, the MAC has gathered a collection of Chilean art of more than 2.000 pieces. The most comprehensive and important collections are those of paintings, with 600 works; the etchings collection, with almost 1.000 works and the drawing, tempera and watercolor collection, with about 130 works. The itinerant exhibitions that the MAC houses have established it as the main stage in Chile for the dissemination of national and international contemporary art. They have also made it the best platform to launch young Chilean Artists.