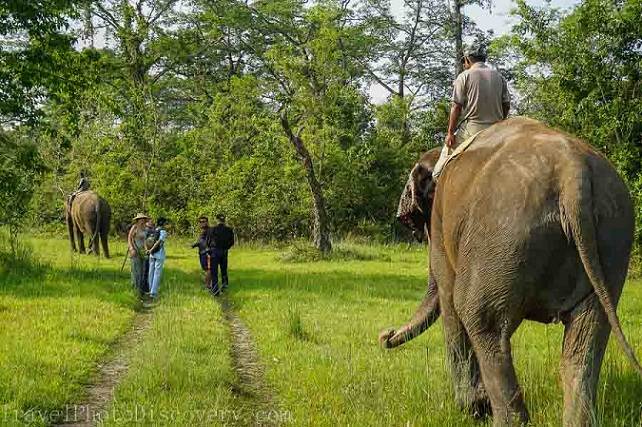 Established in 1973, Chitwan National Park is the oldest national park in Nepal and remains the most popular safari destination in the country today. It was granted UNESCO status in 1984 and is the most protected area of land in Nepal – this is mostly because of the jungle’s endangered inhabitants, the single-horned Asiatic rhinoceros and Bengal tiger. Chitwan National Park hasn’t always been a sanctuary for wildlife though, and throughout the 1800’s served as a private hunting ground for royalty and aristocrats. It was even titled Royal Chitwan National Park up until 2006 when the Nepalese monarchy was overthrown.

Chitwan National Park flourishes with verdant, subtropical territory. Around 70% of the park consists of jungle, with 20% grassland and the remaining lowland. The lush terrain provides a home for hundreds of species of birds, insects, reptiles and mammals.

So when is the best time to visit Chitwan National Park? The reserve falls into three distinct seasons – winter, summer and monsoon season. The best time to visit is from late September to May, as this avoids the monsoon rainfall during June to mid September. Between October and early March you’ll likely experience pleasant temperatures of around the mid twenties (°Cs) and very little rainfall. April and May are the hottest months to visit, with temperatures easily reaching 40 °Cs, however because of the scorching heat the animals frequent the water regularly, making sightings of wildlife a lot easier. For cooler temperatures and better views of the Himalayas, November, December and January offer the best visibility while also avoiding the rainfall. In general, the time of year you choose to visit depends on your own preferences and budget.

With so much to see, we recommend spending about two days in Chitwan National Park. The most popular activity in the reserve is a jeep or walking safari with a local guide, since this is the best way to spot some of the park’s animals. While elephant safaris are also provided in the park, Tucan Travel does not recommend this activity. If you’re a keen birdwatcher, perhaps join a bird watching tour where a naturalist guide will lead you through the forest floor pointing out the various bird species that live in Nepal. This is also a great way to see the flora at a relaxed pace. Canoe rides along the river provide a wonderfully different perspective of the jungle and you might see other reptiles and fish along the way.

Which animals can I see in Chitwan National Park?

Chitwan National Park is known as the top safari destination in Nepal. It’s home to hundreds of species of birds, fish, insects, reptiles and around 70 different mammals. Below are a few of the animals that you might see on a visit to Chitwan National Park.

The single horned rhino was almost hunted to the brink of extinction during the 1970’s, but with new protection and conservation efforts the population has now risen to over 600 – that’s 80% of Nepal’s rhino population. The best way to see them is on a jeep or walking safari with a local guide.

The elusive Bengal tiger is perhaps the most famous habitant of Chitwan National Park. For the best chance of spotting one, join a jeep safari tour with specialised guides, however with between 100 and 150 left in the park, matched with their shy nature – they can be tricky to spot. A walking safari is certainly a little more exciting knowing they are around though!

Chitwan National Park has the highest leopard population in Nepal, with around 70 – 100 living in the reserve. They live peacefully alongside the tiger but can be just as difficult to spot. There have also been sightings of the Clouded leopard, after they were thought to be extinct, they were caught on camera in Chitwan in the 70’s.

Deer are commonly seen in the park, and you are likely to see barking deer, spotted deer, hog deer and sambar. They are often spotted close to monkeys, taking advantage of food dropped on the ground. And if you hear a lot of noise from those monkeys and deer? Keep an eye out – it might mean a predator is close by!

Chitwan National Park has significant numbers of the Gharial crocodile. They are known for having a slim, elongated snout with a small bulbous shape at the end, similar to a ghara (a local type of pot!). This is where the crocodile gets its name from. For the best chance of spotting them, book a tour with a naturalist guide and enjoy spotting them in the water.

The Asia elephant is a common sight in Chitwan National Park – however unfortunately most are now domesticated and used for riding safaris. Historically, elephants have been used for rhino safaris and jungle treks, because they were the simplest way to get around the terrain in the park. However conservation and animal rights groups are continually monitoring the use of elephants in Nepal and visitors are becoming increasingly aware of the ethics behind it.

The rhesus macaque is the most commonly spotted primate in Chitwan National Park, but you may also see the beautiful grey langur. Both are native to the Asian continent and with decent numbers present in the park, they aren’t too hard to spot on a safari. Joining a safari tour with a naturalist guide will improve your chances and you’ll likely hear them before you see them!

The shaggy sloth bear shares its name with the notoriously slow creature because of its long claws and tree climbing abilities – they eat mainly termites and ants found in the wood. They are a common sight in Chitwan National Park with around 250 calling the reserve home – that’s considered the largest population of them in Nepal.