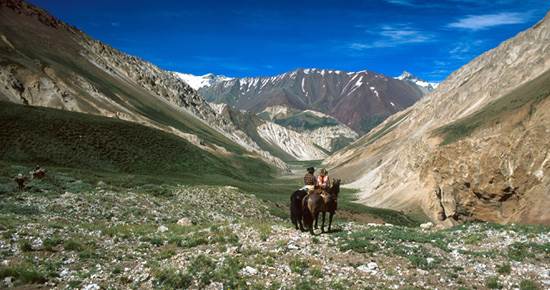 The Central Valley of Chile extend across three regions: Valparaíso, Libertador Bernardo O’ Higgins and Maule. All three feature similar geographies, although each one boasts its particular identity revealed in the centuries-old traditions cultivated by the first inhabitants in the countryside and along the Pacific coast.

This is a very large extension of fertile land and mountains that are covered in snow for most of the year, with a chilly sea that grows warm as it makes its way into the homes and ports by means of endless stories waiting to be heard.

Valparaíso, declared a World Heritage Site by Unesco, and the port of San Antonio, are a melange of longshoremen working the piers, fishermen in the coves and travellers going to and from, with the old neighborhoods, bohemian bars, and the constant movement in the vibrant hills.

The ocean joins with the traditions of the Chilean countryside in the environs of Constitución, generating a special identity in which farmer and fisherman can well be one and the same person.

Chile’s most important grape growers and wine vintners are located in the Colchagua and Cachapoal valleys. One can stroll around with a glass of fine Syrah in hand, listening to how the grape juices are produced, right there where they are made. The seasons here are well-defined. The winter rains blanket the mountains in thick snow, which skiers always welcome and and lose no time enjoying.

Although this is the most heavily-populated part of the country, these valleys are home to two outstanding national parks: La Campana, the setting of one of the tallest mountains in the coastal mountain range, surrounded by indigenous Chilean palms; and Radal Siete Tazas, with its spectacular waterfalls at the foot of the Maule Region’s mountains.  Less well-known are the smaller protected areas Altos de Lircay, visited by growing numbers of people.

Aficionados of architectural identity are drawn by a true jewel: the mining town of Sewell, declared a World Heritage Site. It is a city of stairs. There are no streets there, and it is as interesting for tourists as the towns of Lolol, Vichuquén and Chanco, where the authentic rural culture remains vibrant.

As if all this were not enough, the central valleys are also irresistible because of their thermal spas. They are waters that spring from the Andes, starting from this zone and continuing towards the far south..